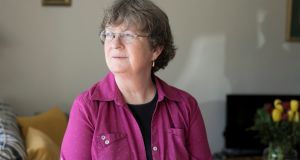 Adrienne Cullen: The report details two significant opportunities the hospital missed to spot her cancer at an early stage when she first attended in 2011. Photograph: Judith Jockel

The failure of a Dutch hospital to diagnose an Irishwoman’s cervical cancer was a “calamity” arising from multiple deficiencies and shortcomings in its care systems, an investigation has found.

As a result, there was a delay of two years in treating Adrienne Cullen, which “considerably reduced the prospects” of her treatment working, according to the report by the hospital that cared for her.

Ms Cullen, who battled for greater openness in the Dutch health system after discovering she had been misdiagnosed, died last December at the age of 58.

In its report, University Medical Centre Utrecht admits that “due to a diverse series of human errors, failures in communication and the organisation of the care, crucial pathology results were missed”.

As a result, her treatment “must be regarded” as a calamity. This is defined in the Netherlands as “an unintended or unexpected incident relating to the quality of care that has resulted in death or a serious consequence for the patient or client of the care facility”.

The report details two significant opportunities the hospital missed to spot her cancer at an early stage when she first attended in 2011.

A smear test taken in February that year was assessed as not abnormal by two experienced testers, a cytological analyst and a pathologist, but the report says this did not provide “absolute certainty” there were no abnormalities.

“The conclusion may have been due to the fact that the abnormal cells were not present in the microscopic specimen (sample bias) or because the examination was not properly interpreted (interpretation bias).”

In fact, when the slide was reassessed last year by seven analysts and four pathologists, they all found it was abnormal. The report concludes the original “diagnosis had not been made according to the professional standard”.

Had the original smear been assessed as abnormal, Ms Cullen would have been referred to colposcopy and “one may assume that this might have prevented the cervical cancer results from being missed”.

Separately, in April 2011, Ms Cullen underwent an endocervical curettage, a common procedure during which a small sample of tissue is checked for cervical cancer. Testing in the hospital’s pathology lab showed “abnormal, unexpected, critical and disturbing” signs of an aggressive cancer, an adenocarcinoma.

However, at a time when the hospital was transitioning from paper to electronic files, the pathology results went missing and were only spotted two years later, in April 2013, when a researcher noticed they had not been followed up.

“The fact that the missing results were discovered two years later was purely coincidental and was not due to the built-in safeguards,” the report notes.

The failure of Ms Cullen’s gynaecologist “to take note of crucial pathology results coincided with the failure of multiple provisions and arrangements that were also intended to prevent (the harmful effects of) shortcoming in the care process”.

Events showed how “seemingly minor deficiencies” in the functioning of a healthcare system can give rise to “an obviously unsafe situation”, the report says.

For example, Ms Cullen’s gynaecologist never informed her of the curettage procedure. As a result, Ms Cullen was unaware the pathology had been done and couldn’t ask her doctor about it.

Although the gynaecologist told Ms Cullen of her cancer when she became aware of it in 2013, the report shows the hospital resisted an investigation on the basis that the events had occurred more than two years previously.

Even though the manager of the hospital’s woman and baby division repeatedly pressed for an investigation, “the response is that people know what has transpired and that a new investigation, after such a long period, would not offer added value”.

The report concludes Ms Cullen was right to insist that an investigation focus on the entire hospital. That the gynaecologist “missed the pathology results would not have led to a significant delay in treatment had the care process not also suffered other serious shortcomings”.