Bells ring out to mark Cyril’s 80 years of campanology

95-year-old Cyril Galbraith has been ringing bells for over 80 years and this year Taney has decided to hold an annual bell ringing competition in his honour. Video: Enda O'Dowd 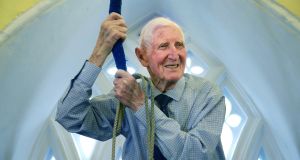 Cyril Galbraith in Taney Church, Dundrum, Dublin. Now 95, he has been ringing bells for over 80 years. “You can’t have machines doing everything,” he said. Photograph: Nick Bradshaw

When Cyril Galbraith walked into St Mary’s Cathedral in Limerick as a 15-year-old boy to work out how the bells there tolled, Glen Miller and Judy Garland were flying high in the charts, Rhett Butler didn’t give a damn and Adolf Hitler’s plans to invade Poland were at an advanced stage.

It was 1939 and little did the boy know that 80 years down the road he would still be ringing church bells or that his passion for the pursuit would see a competition one day held in his honour.

“There wasn’t a whole lot to do in Limerick back then to be honest so it was good to have a distraction, a hobby,” Ireland’s oldest active bellringer told The Irish Times on Friday afternoon as his a-pealing achievements were celebrated by Taney Parish in Dundrum, Dublin, where he still pulls the strings.

“Bellringing can be quite physically demanding, particularly since I broke my shoulder three or four years ago, but it’s like riding a bicycle and you get used to how the system works,” he said.

After almost 30 years tolling by the Shannon, his job with the pharmaceutical company Wellcome saw Galbraith transferred to Dublin in 1968. He continued on his bellringing journey in St Patrick’s Cathedral where he was joined by his son who had also become a master bellringer.

“I loved it there and the only reason I stopped ringing in St Patrick’s was because of the stairs, the stairs were an absolute killer,” he said with a laugh.

His talents then took him to Taney where the stairs to the bell tower were more manageable even if the bells then located there were less impressive. But Galbraith set about resolving that.

In the 1990s, the parish rescued the bells from the recently closed St George’s Church on Dublin’s Temple Street and secured them until Galbraith and a small team got the finances to install them in his local church just in time to ring in the new millennium.

The world of bellringing has change almost beyond recognition since he started out, with machines and recordings taking over his role in most churches.

“I suppose that is inevitable really,” he said.

“But even though it is hard to find new people nowadays, the world still needs us. There are times when you need people calling the shots. You can’t have machines doing everything.”