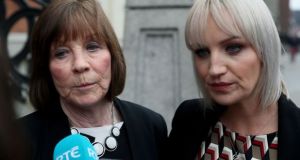 The mother and sister of Clodagh Hawe have brought High Court proceedings against her late husband’s estate.

It is understood Mrs Coll’s claim includes for damages for post-traumatic stress disorder as a result of the murder of her daughter and grandchildren.

Separately, Alan Hawe’s mother, Olive, initiated personal injury proceedings on February 28th, which are understood to include a claim for damages for trauma as a result of the murders. Those proceedings are also against Stephen Hawe in his capacity as the legal and personal representative for their son’s estate.

Stephen Hawe was made administrator of the Hawe estate in February of this year.

Mrs Coll and Ms Connolly are being represented by Liam Keane & Partners based in Dunshaughlin, Co Meath. Gerald Meaney from Kilkenny is solicitor for the Hawes. Neither firm responded to The Irish Times for comment.

Under the Succession Act 1965, Alan Hawe’s mother and father inherited his estate because his wife and children had died.

Clodagh Hawe’s family have called on Minister for Justice Charlie Flanagan to amend the Succession Act to stop the family of a perpetrator of a murder-suicide inheriting the estate.

They met Mr Flanagan last month following an interview on RTÉ’s Claire Byrne Live in which they expressed their frustrations at how information about Alan Hawe’s state of mind before the killings was kept from them.

They have refused to accept the evidence of the inquest into the deaths which suggested that Hawe was suffering from depression when he carried out the murder suicide.

They complained that they did not receive a copy of his suicide letter until 16 months after the event happened.

They also stated that they were told that Hawe had been caught watching pornography on a school laptop and that he feared the consequences of having to return to school on the day after the summer break.

In a statement in response, Castlerahan National School said recent articles and television programmes implied that some of the reasons for the tragedy were that Hawe had been discovered accessing pornography in school or that he had been the subject of disciplinary proceedings.

However, it said it wished to clarify that staff, including the principal, were first informed about Hawe’s online activity on December 2nd, 2016, months after his death.

“In response to specific school management queries, the gardaí have confirmed that there was no access to pornographic websites by Mr Hawe during the school day and, further, no evidence has emerged of any inappropriate activity on the part of Mr Hawe during school time,” the statement says.

Issued on behalf of the school’s board of management, it added that at no stage was there “any disciplinary process or other investigation instigated or threatened by the school in respect of Mr Hawe”.