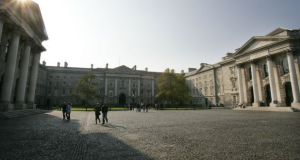 The Knights of the Campanile society was set up in 1926 to host visiting sports clubs, and accepts 50 new inductees each year. File photograph: Alan Betson

Voting to defund the University Times (UT) newspaper in a referendum among Trinity College Dublin students was not a “proportionate or reasonable response,” to controversy over its reporting, provost Patrick Prendergast has said.

Last month the student newspaper reported on an initiation ceremony involving the all-male society, the Knights of the Campanile, in the apartment of the society’s president Ben Arrowsmith.

Reporters from the paper covertly placed a recording device by the open apartment door, leading to accusations of bugging, which the paper reject.

On foot of the story, more than 500 students signed a petition to call a referendum to effectively close the newspaper, by dramatically reducing the funding it receives from TCD students’ union.

The vote will take place next week, on April 10th and 11th.

In an opinion piece published by Trinity News, Prof Prendergast said gutting the UT’s funding would be a “blow against press freedom”.

Prof Prendergast said any club engaging in hazing should be exposed, and the practice “should be totally eliminated from college life”.

“If the University Times made an error when it recorded a conversation then the best way to deal with that is through the junior dean. A referendum to decide to defund the paper is a short-term exercise of power that will create a long-term weakness for all,” he said.

The student paper makes an “important contribution to college life by reporting on the issues that affect us all,” he wrote.

On Thursday, the Knights of the Campanile said an investigation into the allegations of hazing, by the university junior dean, had concluded only that an “unauthorised party” had taken place. The dean is separately investigating the use of the covert recording device by reporters.

A member of the Knights of the Campanile present in the apartment at the time told The Irish Times that new members had been told to eat butter, strap bicycle helmets on their heads, and at another point had to get into a running shower with an umbrella.

The elite invite-only society was set up in 1926 to host visiting sports clubs, and accepts 50 new inductees each year based on their sporting prowess.

Commenting on his membership, Prof Prendergast wrote he had enjoyed attending some of the society’s annual black tie dinners in recent years.

“I have asked the Knights to consider how all members of the Trinity community can be recognised, regardless of gender,” he wrote, adding the “time for gender-specific memberships is long past.”