Bell ringing and global greening: What is happening for St Patrick’s Day?

Following the cancellation of all the St Patrick’s Day parades due to take place across the State on Tuesday, and in light of restrictions on social gatherings and the closure of all pubs Dublin was a very different place this St Patricks day. 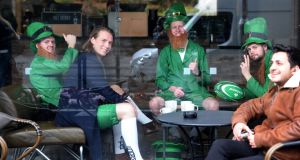 Visitors to Dublin sit in a coffee shop on St Stephens Green on the eve of St Patrick’s Day ahead of what will be a very scaled back national holiday due to the coronavirus. Photograph: Dara Mac Dónaill/The Irish Times.

Following the cancellation of all the St Patrick’s Day parades due to take place across the State on Tuesday, and in light of restrictions on social gatherings and the closure of all pubs, many people may be wondering how to mark Ireland’s national day during the coronavirus outbreak.

We’ve done a sweep of events and initiatives that are still going ahead – most of them remotely and online – and there are some options for those seeking to mark the occasion.

In lieu of the usual celebrations, St Patrick’s Day Festival organisers are calling on communities around Ireland, and the world, to post videos and photos on social media of their festive artwork, costumes, performances and baked goods with the hashtag #StPatricksDaytogether to mark the national holiday.

Turning parts of the world green

The annual Global Greening, where famous international landmarks around the globe light up in green to mark St Patrick’s Day, has continued to go ahead in recent days with sites including the New York Empire State building, Lisbon’s Cristo de Rei statue, Jordan’s Hercules Temple and Niagara Falls all turning green over the weekend. Irish cities and towns will also see numerous buildings turn green.

Bells ring out across the country

The Bishop of Waterford and Lismore Phonsie Cullinan has called for church bells to be ring out across the island of Ireland at 11am on Tuesday as a St Patrick’s Day expression of social solidarity.

Bishop Cullinan said that “ringing of church bells is a call to prayer – wherever you are – and a reminder of the faith that has sustained the people of our island throughout the centuries”.

“The bell ringing is also an expression of social solidarity, an encouragement to care for one other, and for all of us to be inspired and remain hopeful at the difficult time,” he said.

RTÉ has also asked people around the country who had made preparations for the usual St Patrick’s Day parade to post videos of their act as part of a virtual parade to be aired on March 17th.

“So the parades are off, but what about the baton twirlers and the dancers in curlers, what about the bagpipe blowers, the tractor drivers, the stilt walkers, the inflatable shamrocks, the dodgy St Patrick’s and the little boys and girls in green?,” says a shot video on the RTÉ Twitter page.

“Listen, the parades mightn’t be happening so let’s create a virtual parade of our own.”

RTÉ is asking that people use the hashtag #rtevirtualparade and post, tweet or snap your “Paddy’s day party piece”.

The hashtag has already attracted videos of dancing rehearsals at schools, taken before the lockdown was announced, and children dressed up in their finest green attire ahead of the celebration.

A number of musicians, comedians and actors who were set to perform as part of the St Patrick’s Day festivities have announced they are live-streaming performances from their own homes to make up for cancellations.

Musician Colm Mac Con Iomaire played a small concert from his home on Saturday evening on Facebook live and took requests from people watching on their computers, tablets and phones.

Former musical comedy troupe Dead Cat Bounce posted a two hour video of their 2013 Vicar Street Farewell show on Youtube on Sunday night with live chat with fans throughout the screening. The video is still available to view.

Dundalk folk group the Mary Wallopers have announced they will live-stream a gig from their home on Youtube on St Patrick’s day at 8pm. The group, who were previously scheduled to support Lankum at the Cork Opera House on Tuesday night, will also include a link for optional donations.

American punk band the Dropkick Murphys, who for the past 24 years have always performed a gig on St Patrick’s Day weekend, has also announced it will be live-streaming a concert from Boston to fans around the world on St Patrick’s Day across YouTube, Instagram and Facebook live. The gig will kick off at 11pm Irish time.

The National Gallery of Ireland, which is closed until March 29th, is marking St Patrick’s Day by sharing photos of some of their favourite works of art from their collection on Twitter. Posts so far have included work by Harry Clarke, Daniel Maclise, James Worsdale, Walter Osborne, Jack B Yeats and Frederic William Burton with the interactive art exhibition continuing throughout Monday.