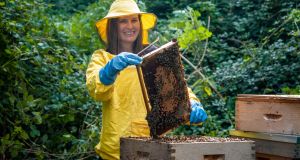 PhD student Saorla Kavanagh of DCU, who led the research that has found Irish heather honey as having health benefits comparable with manuka honey

Irish heather honey contains health benefits comparable with the world renowned manuka honey from New Zealand, according to a study from researchers at Dublin City University and Trinity College Dublin.

Manuka honey is produced in New Zealand by bees that pollinate the native manuka bush. Advocates say it has particularly strong properties that are useful for treating wound infections and actually prevents damage to cell tissue.

The Irish research found a similar overall presence of powerful antioxidants called phenolic compounds in Irish heather honey as has been found in manuka honey.

Researchers also found that multifloral honeys produced by urban bees had a greater level of antioxidant phenolic compounds than their rural counterparts – a finding possibly due to the flower diversity and abundance surrounding hives.

The findings are published in the prestigious journal Food Chemistry.

Honey samples for the research, which was funded by the Irish Research Council, were donated by beekeepers across Ireland.

The research also represented the first ever comparison of Irish single-origin honeys; heather, ivy and oilseed rape and multifloral honeys.

– Honeys with a dark colour typically have a higher total phenolic content and thus a higher antioxidant capacity.

– Ivy honey was the darkest Irish honey analysed and its total phenolic content was less than that of heather and manuka honeys.

Dr White said the research “shows that Irish honey is a high-quality product and something that we should really value".