Belfast pogroms: ‘The street was a mass of brain matter and blood’ 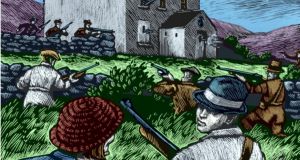 Newly released files have revealed the scale of violence that erupted in the Belfast in the early 1920s.

Almost 500 people were killed in the city between July 1920 and July 1922 in violence that matched the intensity of the worst days of the more contemporary Troubles with near daily murders and sectarian strife.

The nominal rolls of the 3rd Northern Division (1st Belfast Brigade) contains a handwritten list of 455 people killed in Belfast in that period. The victims are denoted as C (Catholic)or P (Protestant).

The rolls list every volunteer in the IRA during the revolutionary period 1916-1923. The inclusion of the victims of the pogroms, the majority of whom were Catholic, was intended to demonstrate the difficulties faced by nationalists in the city.

The files from the Military Service Pensions Collection underline the difficulties that the old IRA had in operating in Antrim, where the population was overwhelmingly Protestant.

Attacks by the IRA on the security forces during the War of Independence were frequently met with vicious reprisals from loyalists who targeted Catholic communities in Belfast.

On July 11th, 1921, a truce was signed between the IRA and the British government that eventually led to the signing of the Anglo-Irish Treaty that December, but it was not observed in the North.

The truce was announced on July 9th. That night an RIC armoured police van entered the Falls Road area and was ambushed on Raglan Street by an IRA unit defending Catholic areas.

Ex-Belfast officer commanding Roger McCorley recalled that the local volunteers fired into the armoured truck using rifles while those inside the vehicle had only pistols.

McCorley said the fact that the RIC patrol had pistols was a sign that they were in fact a reprisal gang as rifles would be impractical in raiding Catholic homes.

“The orders were that if a reprisal gang was caught, no prisoners were to be taken – that they were to get their medicine. They [THE IRA]refused to take any prisoners and they carried on the fight until the whole crowd had been wiped out.”

Despite McCorley’s assertions that the column was wiped out, just one RIC officer was killed, Constable Thomas Conlon from Roscommon. The RIC patrol was saved by police reinforcements that arrived on the scene.

McCorley said that on the day afterwards: “I went up to investigate and found the whole street a mass of brain matter and blood.”

On July 10th, 1921, 16 people were killed in Belfast in what was another Bloody Sunday in the North.

According to McCorley, many Catholic lives were saved by a Protestant republican, Charles McCaull Stewart.

“He was a non-Catholic and was accepted among the Orange element as being one of themselves,” he wrote to the pensions’ board adjudicating on a pension for Stewart.

“He kept us warned of attacks coming during certain periods, with the result that on several occasions when the attacks were launched we had men all ready in positions to beat them off.”

The handwritten list of those who died in sectarian violence would appear to have formed the basis of a mysterious book that was published in 1922, Facts and Figures of the Belfast Pogrom 1920-1922.

The book is written from a nationalist perspective and was intended to impress upon the new Free State government that the Catholic community in the city was under siege. It was written by Fr John Hassan, a Catholic priest in the city, who wrote under the pseudonym GB Kenna.

Just 18 copies were published, and the rest were pulped in August 1922, just before Michael Collins’s death, on the instructions of the provisional Free State government, which feared its details would give succour to the anti-Treaty IRA.

It was eventually published in 1997 and several versions of it are available to read on the internet.

On Tuesday, October 15th, The Irish Times will publish The Revolution Files, a special supplement with highlights from the Military Service Pensions Collection.