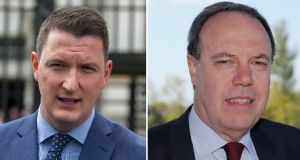 There is a dark symmetry between the two main candidates in the Westminster general election contest for North Belfast.

In 1989 the UDA went into the Finucane house in the constituency and shot dead solicitor Pat Finucane in front of his wife Geraldine and their three children. There was acknowledged British state-force collusion in the murder and an apology from former British prime minister David Cameron – but no public inquiry as the Finucanes have long demanded.

One of those family witnesses to the murder was Mr Finucane’s now 37-year old son John. Also a solicitor, and a plum recruit to Sinn Féin, he is seeking to take the House of Commons North Belfast seat from the DUP’s Nigel Dodds.

At Christmas 1996 the IRA shot and wounded an RUC officer who was guarding Dodds as he was visiting his seriously ill seven-year-old son Andrew at the Royal Belfast Hospital for Sick Children in west Belfast. Andrew, who suffered from spina bifida and hydrocephalus, died two Christmases later.

The IRA subsequently said the attack was not against Dodds but against his police minders. Dodds begs to differ. “It suited the Provos to say that. I was in no doubt whatsoever that they were trying to kill me. I was told that at the time.”

Dodds acknowledges the Finucanes’ suffering. “People talk about my opponent’s experience which was awful . . . dreadful and to be condemned,” he says. “But at the same time I think it is important to remember that other politicians on the unionist side have been equally attacked over the years by the IRA. The difference is that I am prepared to condemn the IRA and the UDA and the UVF unequivocally and explicitly whereas he has sidestepped that unfortunately.”

The accusation of eluding a key question related to a recent article in the Belfast Telegraph headlined, “Sinn Féin’s Finucane palms off questions on IRA”.

But Finucane says he took issue with the headline and tenor of the report. He notes that in the article he condemns “all acts of violence”. This was when he was asked did he condemn the 1993 Shankill bombing in which 10 people were killed, including IRA bomber Thomas Begley.

And in this interview he adds: “For the avoidance of any doubt I oppose violence. I don’t think there is anybody who could probably be in a better position to say that with the authority that I have.”

He will be conscious of how British Labour leader Jeremy Corbyn was lambasted for being general rather than specific in condemning violence where the IRA is concerned. But he repeats his general opposition to violence.

“What I am focused on with regards to legacy is the same message as I have delivered when I have been campaigning for truth and justice around the murder of my father. And that is every victim, no matter who has caused their hurt, is entitled to truth and is entitled to justice.”

He is unhappy, however, with what he feels is a tendency in some quarters to “cherry pick” certain incidents or organisations while ignoring others.

“I don’t want to be elected as an MP where I only speak about violence directed from one of the actors on to one side of the community. I want to deliver for everybody.”

He is campaigning on issues such as opposing Brexit, equality, LGBT rights and getting Stormont back up and running and says any notion of a sectarian dogfight repulses him: “If I thought for a second that I was entering into Green versus Orange politics I would withdraw my name from the election.”

To have such a sharp, confident, articulate and well-known candidate is a huge catch for Sinn Féin. Does he have bigger ambitions, does he foresee a Sinn Féin leadership role perhaps? And were he to lose would be he in for the long haul by, maybe, entering the Assembly? But he dodges these questions by saying his sole ambition now is to win North Belfast. Regardless, if he has the stomach and stamina for politics he surely has a big future in Sinn Féin.

Twenty eight years on from the Finucane murder – and more than 20 years on from the hospital attack when Dodds was visiting his son – North Belfast and Northern Ireland are different and better places. But this is a fiercely contested constituency with more than a Westminster seat at stake.

This also is a constitutional confrontation. The DUP is desperate to safeguard the seat to demonstrate that the Sinn Féin surge in the Assembly election of early March is halted. Sinn Féin likewise is desperate to show that for the first time in the history of Northern Ireland that republican politics has the upper hand in North Belfast.

If Finucane wins it would send a much bigger message than a mere additional abstentionist seat for Sinn Féin. It would strengthen Gerry Adams’s demands for a Border poll on Irish unity; it would further unnerve unionism.

It could go either way. Dodds, a full-time politician and qualified lawyer, has held North Belfast since 2001. In the UK election two years ago he was more than 5,300 votes ahead of his nearest rival, Sinn Féin’s Gerry Kelly.

But much has changed since then. In the Northern Assembly elections in March the constituency reduced from six to five seats and nationalists took three of them. Then, unionist and nationalist candidates mustered about 17,700 votes each.

However, the inclusion of the 1,559 votes that went to Fiona Ferguson of People Before Profit – which is not standing in the Westminster election, but who would be viewed as more nationalist than unionist in their leanings – would appear to give nationalism the overall advantage.

However, Dodds has a free unionist run as neither the UUP nor the Progressive Unionist Party is standing. But there is another imponderable: the SDLP is putting forward a largely untried candidate, its press officer Martin McAuley. Would SDLP voters ditch him if they saw a chance of Finucane, with his middle-class appeal, unseating Dodds?

Dodds and Finucane and their respective election troops are conscious of all the variables. Sinn Féin sees opportunity, the DUP danger. Which is why so much time, effort and numbers are being invested by both camps into taking North Belfast.

The SDLP, Alliance, Greens and Workers’ Party are also running candidates but there is no doubt this is a head-to-head between two men who have witnessed and experienced the black violence of the Troubles.

It is very hard to call but if unionism has truly woken up to how a pivotal constituency could be lost, and the tremors that would cause, then Dodds might just shade it.