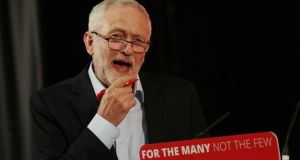 Jeremy Corbyn has described the IRA as terrorists, condemned their acts of murder unconditionally and said they and the British army were not equivalent participants in the Northern Ireland conflict.

The Labour leader was responding to a challenge from Northern Ireland secretary James Brokenshire to “come clean” on his attitude to the IRA.

Mr Corbyn’s aides told the PoliticsHome website that he believed the IRA were terrorists. “Yes. The IRA clearly committed acts of terrorism,” they said.

Mr Brokenshire joined in the attack on Monday after Conservative-supporting newspapers criticised Mr Corbyn for an interview in which he declined to condemn IRA bombings without also condemning loyalist bomb attacks.

In the interview with Sky News on Sunday, the Labour leader was asked five times if he would condemn the IRA. He said he condemned all bombing, adding that he always supported the peace process in Northern Ireland.

“In the 1980s Britain was looking for a military solution in Ireland. It clearly was never going to work. Ask anyone in the British army at that time, and therefore you have to seek a peace process. You condemn the violence of those that laid bombs, that killed large numbers of innocent people, and I do,” he said.

After further questioning, Mr Corbyn explicitly condemned IRA bombings, but added that loyalists had been responsible for bombings too. “I condemn all the bombing by both the loyalists and the IRA,” he said.

DUP leader Arlene Foster on Monday described the interview as “abhorrent” and accused him of showing indifference to the IRA’s victims.

“He has advocated on behalf of the IRA. He has put forward petitions for some of their members. He has attended memorial services for those he calls brave people, who I would call terrorists,” she said.

“It’s not just that he reached out to the IRA and spoke to them. There are many fine people who tried to speak to the IRA to ask them to desist and to stop what they were doing. He actually supported them. He wanted the IRA to win.”

Mr Corbyn’s links with Irish republicans during the 1980s and 1990s returned to the news last week when the Times reported that he was arrested in 1986 during a Troops Out demonstration outside the Old Bailey. The Labour leader on Sunday defended his record on Northern Ireland, claiming that it had helped the cause of peace.

“I represent a constituency which has a very large number of Irish people living in it, and I pointed out that the prevention of terrorism act was counterproductive and was criminalising large numbers of wholly innocent Irish people.

“I took up the cause of the Guildford Four and Birmingham Six who were grotesquely misjudged by British courts and eventually were freed on the decision of the high court in Britain, and I wanted to bring about peace in Ireland. You have to talk to people with whom you don’t agree. And I did,” he said.