Bathing banned at Kerry beach after bacteria found in water 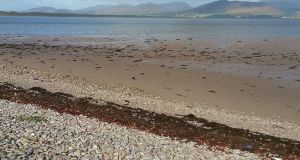 A beach in Dingle Bay has had a no-bathing notice erected this weekend after high levels of a bacteria associated with the human and animal gut were found in water samples.

Cromane beach is not a designated bathing area, however it is used by families and is also a fishing harbour area serving mussels and other fish farms in the Castlemaine harbour area at the eastern extreme of Dingle Bay.

It is the third Kerry beach to see a no-swimming sign erected in the past ten days – and all are believed to be related to weather events.

Last week, swimming at Inny beach and the adjoining Waterville village beach was placed off limits because of exceptional rainfall washing down bacteria from the Inny valley and a lightning strike on the waste-water pumping station near the village. Both beaches have since re-opened.

In a statement on Friday evening, Kerry County Council said the bathing water results from Monday for Cromane had come back showing high levels of Enterococci.

It would appear that high rainfall levels in the catchment around Cromane beach on Sunday last may have caused the problem, the council said, adding this conclusion was based on the very low salt levels of the water at the time of sampling.

“This is a common occurrence during incidents of high rainfall during summer months where animal faeces may be washed into the catchment and subsequently into the bathing waters leading to elevated bacterial levels, “ the council said.

The Environmental Health Office advised that the levels found in Cromane required a bathing prohibition to be put in place.

And while Cromane was a not designated bathing area under the bathing water regulations , “in the interest of public health”, a prohibition notice was being erected on the beach.