Back to the failure: Belfast's £77 million sports car 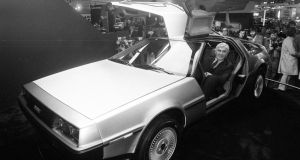 The Northern Ireland Office (NIO) was “seduced” into pumping at least £77 million into the DeLorean car project in Belfast, even though there were strong indicators it would not succeed, an academic from Queen’s University has argued in a new study.

Dr Graham Brownlow, from the university’s management school, has published research papers on the production of the gull-winged car in west Belfast, one of which is called Back to the Failure: An Analytic Narrative of the DeLorean Debacle – a play on how the car was used in the film Back to the Future.

John Z DeLorean had attempted to interest the Industrial Development Authority in the 1970s to finance production of his car in the Republic. While the IDA had serious misgivings about the viability of the project – and also about DeLorean – the NIO decided to take a risk on the mercurial American.

Dr Brownlow said that such was the level of conflict and the degree of unemployment in the late 1970s and early 1980s in Belfast and Northern Ireland that DeLorean thought he had the British government “over a barrel” in terms of continued funding but that in the end, “he overplayed his hand”.

Dr Brownlow said the British treasury had doubts about the DeLorean project but that the Northern Ireland Office was anxious to try to reduce unemployment and civil unrest. It was believed that creating jobs at the Dunmurry plant in southwest Belfast was a gamble worth taking.

Dr Brownlow said that official monitoring was weaker and the subsidy package for DeLorean was more generous than elsewhere in the UK.

“John DeLorean entered this institutional environment and negotiated an initial master agreement that suited his ends, at the expense of the taxpayer,” he said.

“This contract enabled him to hire ever more workers, despite the growing commercial realisation that the project was never going to succeed.”

DeLorean employed about 2,500 people from both sections of the community in an employment blackspot at the height of production in 1982. However, Dr Brownlow said, he engaged in cynical “binge recruiting” at that time when he knew his company was in serious trouble.

“John DeLorean was willing and able to pursue this strategy because he rationally calculated that the more workers the firm hired, the more generous his subsidy package would be and the more politically difficult it would be for the authorities to close the project,” he added.

Dr Brownlow said that DeLorean “was fond of telling colleagues in New York that he had the British government over a barrel” on the issue.

In the end however, the sceptics in the British treasury gained the upper hand over the optimists in the NIO who had maintained some faith in DeLorean, with the British government pulling the plug in 1982, four years after the factory was built.

“Legal factors and political commitments rather than any serious economic arguments kept the firm in business as long as it did,” said Dr Brownlow. “DeLorean was quite cunning initially; he used his guile to beat the rules of the game. But eventually he overplayed his hand and it was this miscalculation that enabled the firm to be closed down.”

Dr Brownlow said the Northern Ireland Office “was seduced by DeLorean’s sales patter” into first supporting and then sticking with his company. It hoped he would be a “catalyst” for inward jobs investment but instead he became a “barrier” to such development.

His argument that it was the conflict – rather than his own mismanagement – that caused the failure of the company served to put off other potential investors.

Dr Brownlow added that the £77 million in taxpayers’ money – which he believed was a “big under-estimate” – could have been put to better use in creating infrastructure, providing employment training and supporting more modest projects in west Belfast at the time.

He hoped his research would help local businesses learn from the mistakes of the past and improve opportunities to boost economic growth.

Of 9,500 DeLoreans made, there are still 6,500 on the roads throughout the world, with more than 100 of them owned by enthusiasts in Ireland.

In 1982 , DeLorean was arrested in a multi-million dollar cocaine bust. He had hoped this money could help refloat the company. He was acquitted on the basis of illegal entrapment. He died in 2005