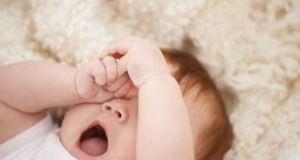 Alexandra, Heidi and Hollie were the girls’ names growing most in popularity last year

Jack and Emily were the most popular baby names registered last year, according to the Central Statistics Office (CSO).

Jack retained the title as the most popular baby boy’s name, a position it has held since 2007, except for 2016 when James claimed the top spot.

Jack was followed by James, Noah, Conor and Daniel as the five most popular names for baby boys in 2019.

Emily has been the most popular name for baby girls since 2011. Fiadh and Hannah were new entrants to the top five in 2019. Amelia dropped out of the top five last year, having been there since 2015.

The latest publication by the CSO is the second year in a row it has recognised the síneadh fada.

Alexandra, Heidi and Hollie were the girls’ names growing most in popularity last year. Alexandra moved up 25 places and Heidi and Hollie both moved 20 places in the rankings between 2018 and 2019.

The CSO’s Baby Names of Ireland lets you track how many babies were registered under any given name in Ireland between the years 1964 and 2018.

The CSO has also provided a breakdown of the most popular baby names by county for 2019.

The CSO has published babies’ forenames since 1998 and receives this data from the General Registration Office (GRO).

“Back in 1969, John, Patrick, Michael, James and Thomas were the names most favoured by parents of new-born baby boys. There were 209 male new-borns named John in 2019, just over 7 per cent of the number of boys given the name John in 1969,” she said.

“Interestingly, not one of the top five names for girls appeared in the top 100 names a half century earlier. Mary, Catherine, Margaret, Ann and Elizabeth were the most popular names for baby daughters in 1969, with 2,182 baby girls named Mary in that year.

If you are reading this on The Irish Times app, check the full baby name list here.