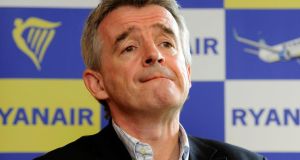 Michael O’Leary today said that airline Ryanair does not have a policy of deleting cockpit voice recordings. Photograph: Dave Meehan

The Irish Aviation Authority (IAA) has accused Channel 4 of once again engaging in a “misguided attack” on its regulation of Ryanair.

The IAA said last night’s Dispatches programme was “based upon false and misleading information” which could undermine the confidence of air passengers.

Ryanair has said it will sue the programme-makers for its “false and defamatory” investigation into its safety policy.

A Channel 4 spokesman responded: “We stand by our journalism, and will robustly defend proceedings if they are initiated.”

The programme included a comment from serving Ryanair pilot Captain John Goss who said Ryanair pilots had reported incidents to aviation authorities, but had not heard back, a claim the IAA denies.

He added: “My personal belief is that the majority of Ryanair pilots do not have confidence in the safety agencies and that is a pretty critical issue.”

The IAA replied to this claim this morning by stating: “The IAA has responded to personal letters and reports from Ryanair pilots, this included several meetings and face-to-face interviews with pilots and their legal and professional representatives.

“The IAA conducts a comprehensive oversight and surveillance programme of all Irish airlines and Ryanair Plc fully complies with all European and international regulations in all areas of its operations.”

The Department of Transport expressed confidence in the IAA’s regulation of Ryanair and said Irish airline and aviation standards were on a par with the best regulatory standards anywhere in the world.

In a statement, the department added: “The IAA has advised the department that Ryanair’s fuel policy fully complies with European Aviation Safety Agency (EASA) regulations and it is regularly monitored by the IAA as part of its normal safety oversight activities”.

Ryanair chief executive Michael O’Leary said the airline plans to sue Channel 4 over claims that its pilots have serious misgivings about its safety policies.

The programme, Secrets of the Cockpit, which was aired last night, alleged that Ryanair pilots felt under pressure to save fuel and did not feel there was an open and transparent safety culture within the airline.

O’Leary accused the Ryanair Pilot Group (RPG) of being motivated by the “same industrial relations agenda” which has been present for the last 25 years which is to get union recognition within Ryanair.

The programme interviewed four Ryanair pilots, three anonymously, who raised the issue of being pressured to carry less fuel.

The issue came to the forefront when three Ryanair flights issued Mayday distress signals after they ran low on fuel while being diverted from Madrid to Valencia in Spain last year.

“More than 50 per cent of Ryanair pilots every single day take extra fuel on top of their extra fuel because our policy is that if they want more fuel they should take it.”

He also blamed the pilots themselves for occasions in which the cockpit voice recorders (CVR) relating to 12 different incidents had disappeared.

He said the recording cannot be kept if the pilots on landing do not pull the circuit breaker. “They failed to comply with our own rules,” he said. “Sometimes they don‘t remember on landing.”

The Ryanair Pilot Group has described a statement released by the IAA to The Irish Times as “shameful”.

In it, the IAA said it did not rely on surveys carried out by pilot groups “which often tend to be motivated by industrial relations issues or employment issues.”

More than 1,000 Ryanair captains and first officers took part in a survey conducted by the group which claims to represent half of the airline‘s senior flying personnel, but is not recognised by the airline.

The overwhelming majority of those surveyed believe Ryanair does not have an open and transparent safety culture.

It found 94 per cent wanted regulators to conduct an inquiry into the impact of employment practices on safety, while two-thirds were not comfortable raising issues through an internal reporting system.

Ryanair has dismissed the survey as a “fabrication” and the RPG as a front for pilots from rival airlines.

Irish Airline Pilots Association (Ialpa) president Captain Evan Cullen said he believed the survey was valid and the programme called into question the effectiveness of the IAA.

He also believed the programme highlighted the dual role that the IAA has as both the safety regulator and the promoter of Irish aviation.

“We do not believe that such an entity should have a dual role,” he said. “It is not consistent and it is certainly not best practice that the promoter and advocate for Irish aviation should be a commercial body which also has a responsibility for aviation safety regulation and oversight.”

In response the IAA said income from safety regulatory services is managed completely on a non-profit basis and that Ryanair is only its sixth largest source of income.