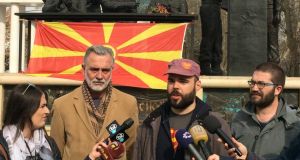 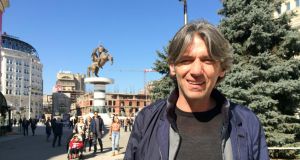 Boris Damovski is used to strangers approaching him in the streets and cafes of Skopje, Macedonia’s capital. But now, instead of asking about the popular satirical television show he produces, they have another question: When are we marching again?

Damovski is a famous face and key organiser among thousands of Macedonians who are protesting against a proposed multi-ethnic government, which they see as a threat to the future of their Balkan country.

A planned coalition between the Social Democrats and parties from Macedonia’s Albanian community would boost the rights of the 25 per cent ethnic minority and the status of its language – reforms that critics from the Slav majority fear could fracture the state and the status quo of a fragile region.

“People feel threatened by this Albanian platform, which was revealed after the election and is part of a deal with the Social Democrats that is totally unclear. People didn’t vote for this,” says Damovski.

The nationalist VMRO-DPMNE party took 51 seats in last December’s election, but failed to find partners to form a majority in the 120-seat parliament. The Social Democrats, with 49 seats, stepped in and made a deal with ethnic Albanian parties that would give the coalition 67 seats.

President Gjorge Ivanov – who is close to VMRO-DPMNE – refused to give a mandate to the coalition, however, saying it threatens his country’s sovereignty by pushing an agenda formulated in neighbouring Albania, where leaders of Macedonia’s ethnic Albanian parties recently discussed their reform plans with the country’s leader.

Federica Mogherini, the EU’s foreign policy chief, visited Skopje last week and joined the US and Nato in urging Mr Ivanov to change his mind – a move Damovski calls “demeaning” to his country of two million people.

“To have to listen to lectures from unelected EU officials like her is insulting,” he says.

“We Macedonians now live on this small piece of land, the only place where our name and language and culture still exist. No one can tell us to give it away or put it at risk.”

Damovski and fellow protesters fear that raising the status of the Albanian language and giving more power to mostly Albanian districts of Macedonia would feed separatism and embolden advocates of a “greater Albania” in the Balkans.

Russia last week accused the West of working with Albania and Kosovo to install a government in Skopje that would back a greater Albania agenda – stoking alarm in Macedonia, which narrowly avoided an inter-ethnic war in 2001.

Damovski told people at a recent Skopje rally to stop chanting anti-Albanian slogans, and he and fellow protest organiser Bogdan Ilievski insist the marches – at which two reporters were beaten last week – are not fanning nationalist flames.

“We are against violence and we appeal to the conscience of party leaders to resolve this reasonably,” says Ilievski, an architect and prominent voice in Macedonian social media.

“Everyone has a place in Macedonia. But we have lots of other minorities – Serbs, Roma, Vlachs and others – and these Albanian proposals would make Macedonia a binational, bilingual country. That would be dangerous.”

For ethnic Albanians like Ziadin Sela, however, the proposed coalition could finally end discrimination against his community.

“Nothing in the Albanian parties’ declaration is a threat to Macedonians,” insists Sela, leader of the Alliance for Albanians party.

“We want Albanian to be an official language everywhere in Macedonia; we want a fair and functioning law on regional development and distribution of the state budget; and we want to make an equitable situation between Macedonians and Albanians through real decentralisation.”

Sela says he would welcome a national unity government comprising all parties, as long as deputies gave up their immunity from prosecution.

Like many people here from both communities, he believes top members of VMRO-DPMNE are fomenting a crisis to evade prosecution over a vast spying and corruption scandal that has dogged the country for two years.

“VMRO is hiding behind all this, scaring people with talk about the language issue and ‘dividing the state’,” Sela says.

“Really, they are trying to protect themselves from going to jail. For the sake of five or 10 VMRO heads, the whole of Macedonia is suffering.”