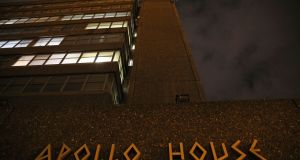 A Wednesday deadline has been set by the High Court for campaigners, who took over the building on December 17th, to vacate Apollo House following a case taken by developers who propose to knock the building for redevelopment. Photograph: Niall Carson/PA Wire

Apollo House homelessness campaigners expect the remaining 30 residents in the former office block to move into facilities “appropriate to their needs” following an agreement with Minister for Housing Simon Coveney.

The Minister made a deal with the Home Sweet Home campaign that the residents would be accommodated in two new buildings with the provision of private rooms, 24-hour access, their own key, accommodation for couples as well as single units, and full support services.

Campaigner Brendan Ogle said at a press conference at Unite trade union offices in Dublin: “I am confident the 30 residents in Apollo House will be moving into facilities appropriate to their needs.”

But he warned that residents of Apollo House in Dublin would not leave unless they were properly accommodated. Home Sweet Home stopped accepting new residents in the building on Sunday.

Mr Ogle said there were no circumstances, “court deadline or no court deadline” where anyone in Apollo House would be left homeless.

A noon deadline on Wednesday has been set by the High Court for campaigners, who took over the building on December 17th, to vacate Apollo House following a case taken by developers who propose to knock the building for redevelopment.

Mr Ogle pointed out that the case was up for mention at 11am on Thursday. It was now in the hands of Dublin City Council.

If arrangements for appropriate accommodation were not in place he said the campaign would explain that to the court.

He said however that 42 extra beds were expected to come on stream this week.

In a statement Mr Coveney said a sufficient number of emergency beds were now in place to meet the needs of rough sleepers in Dublin. But additional capacity would be put in place through the two new facilities, in the coming months.

He reiterated that dealing with homelessness remained a top priority for the Government. He reaffirmed his commitment to funding of €5.35 billion to prioritise homelessness and to accelerate the overall supply of housing, in recognition of an accepted housing crisis.

The Minister reiterated his pledge that nobody would be in emergency hotel accommodation by July 2017.

The Home Sweet Home campaign team is unaware yet where the two hostel buildings will be or if they would be Nama properties but said the Minister confirmed they would cost more than €4 million.

Aisling Hedderman highlighted some of the campaign’s successes and said 56 people had been assisted through Apollo House and were now in 24-hour access accommodation, including 11 couples who previously could not access such shelter or stay together.

Mr Ogle also announced that the campaign would put a legal team together to take a legal challenge that the 1937 Constitution contains a right to housing.

Film-maker Jim Sheridan, a campaign supporter, intervened and issued a caution on legal action. “It may not be that the Constitution enshrines that right,” he warned. He said the campaign could end up tied up in the courts. “I’ve been there and you don’t need that,” he said.

Mr Ogle said the campaign team was awaiting a full response from the Department of Finance to a detailed letter it sent last week in relation to its obligations under Nama in relation to the provision of housing.

He also said full accounts would be published in relation to the €160,000 raised in funds. He said there were some security and medical costs but there was a “good chunk remaining” and the campaign would be “fully accountable to the public who donated”.

Artist Glen Hansard paid tribute to volunteers and campaigners. His involvement was personal he said including his own family experience of needing such services in the 1970s and 1980s and how volunteers helped his mother “figure out the chaos of her young life”. He got involved as well because he believed there were not enough emergency beds in place.