The Meath village where pubs will stay closed on Good Friday 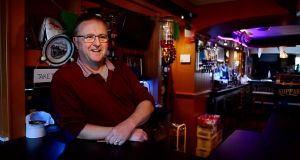 When the licensing laws changed last year, allowing pubs to serve alcohol on Good Friday for the first time since 1927, there was relief among publicans.

Vintners groups described the former law as “archaic and discriminatory” and argued that it deprived pubs of revenue during one of the busiest weekends of the year. Others resented what they saw as a religious anachronism and were embarrassed at the idea of tourists being unable to find a place to have a drink on the day.

The laws may have changed, but the pubs in the Co Meath village of Drumconrath will remain closed tomorrow.

The three – Fay’s, The Old Thatch (Dempsey’s) and Muldoon’s – decided not to embrace the law change last year and are resisting again this year.

Dermot Muldoon, of Muldoon’s bar, said the move had been politely suggested by parish priest Fr Finian Connaughton, but that his decision had nothing to do with religion.

“It just happened to happen and we took the decision without influence from anybody else,” he said.

Mr Muldoon said the decision to keep their doors shut was to maintain a tradition that many publicans cherish: having two guaranteed days off in the year, Good Friday and Christmas Day.

He said he used to travel on Good Friday across the Border to meet friends in Crossmaglen, Co Armagh, with his father to have a few pints.

Mr Muldoon said locals have been understanding of his decision.

Pauline Fay, owner of Fay’s, said Good Friday was a time for family when her four children were growing up.

“It was the only time you had quality time. Nobody else was there for that day. The children are all adults now, but you still go back to spending time with them,” she said.

Ms Fay intends to spend the day with her daughter, Claire, and go for a drive, do some shopping and then go to the Good Friday services.

She said there is a lot of respect from customers for her position, and that nobody passed any remark on the bar staying closed this year.

“The way Ireland is going, a lot of wrong decisions have been made in the last number of years - serious bad decisions. We are not going to go with this one,” she said. “It was a very disappointing decision when there are so many other important things. If the Government ran the country like we run our pubs, this would be a brilliant country to live in.”