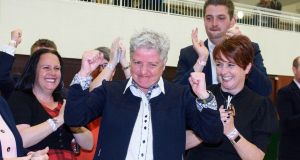 The centre-ground Alliance Party is making significant headway in the local elections in Northern Ireland while the DUP saw its first openly gay candidate elected to office.

As counting resumed on Saturday, the DUP and Sinn Féin were holding their own as the two dominant parties in Northern Ireland, while the SDLP appeared to be performing reasonably well.

The Green Party, which won four seats in the 2014 local elections, also seemed set to make gains. The Ulster Unionist Party, which won 88 seats in 2014, appeared to be under pressure although with the vagaries of the proportional representation, single transferable vote system, how it and the other parties perform will not be clear until later on Saturday.

The two big stories of the count on Friday were the election of the DUP’s Alison Bennington to Newtownabbey Borough Council and the significant gains made by Alliance.

The DUP’s decision to stand Ms Bennington, who is gay, in the Glengormley area of the council prompted criticism from some Protestant fundamentalist supporters of the party.

However, party headquarters resisted the pressure and she won a seat.

Welcoming her election, DUP leader Arlene Foster said it did not necessarily indicate a shift in the party’s opposition to same-sex marriage.

Asked what was the significance of Ms Bennington’s win, Ms Foster told BBC Radio Ulster: “I think it sends out a clear signal that we are open to everyone who wants to protect the union and is prepared to sign up to our policies and objectives.”

The Alliance party won 32 seats in 2014 with just under 7 per cent of the vote. While a number of electoral wards are still to be counted, the party’s overall vote was up by about 5 per cent. “It has been a very good election so far and our return of seats could be in the high 30s or early 40s,” predicted one senior party source.

The Irish and British governments will be studying the results for any indications that the talks they are hosting to restore Stormont beginning on Tuesday might be successful.

Ms Foster said she believed voters wanted the Northern Executive and Assembly reinstated. There was some hope that the public reaction to the New IRA murder of journalist and writer Lyra McKee might spur the DUP and Sinn Féin, in particular, to strike a deal in these talks to bring back the powersharing administration.

Ms Foster said her party would “not be found wanting” in seeking to end the political stalemate. “We are a devolutionist party, we want to see devolution returned to Northern Ireland,” she said.

In the election, there were 819 candidates standing for 462 seats on the North’s 11 councils, six with unionist majorities and four with nationalist majorities, and Alliance holding the balance of power in Belfast.

Among the councillors elected so far was Kyle Black, who was returned for the DUP to Mid Ulster. His prison officer father, David Black, was murdered by the New IRA in 2012. Mr Black said his father was a huge influence on his life.

“The reason why I got involved in politics is that I want to play my part in moving Northern Ireland towards being a truly peaceful society that thrives economically, culturally and socially and offers opportunities,” he told BBC Radio Ulster.