Chocolate, prayers, US vice-president wishes and a trip or two up Croagh Patrick for Mayo 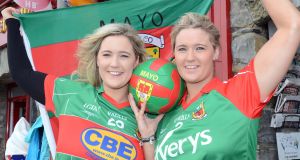 Twins Clara and Maria Harrington from Westport flying the flag for Mayo ahead of Sunday’s All-Ireland football final against Dublin. Photograph: Paul Mealey

When Dutchman Dirk Schonkeren sculpted a milk chocolate version of the Sam Maguire Cup, he never expected it would become a rotating window display over several years.

“I plan to put it into a glass case if Mayo wins on Sunday,” the master chocolatier says. “And I hope I don’t have to wait another 66 years before taking it out again.”

It took him two days to mould and sculpt it back in 2013, and the assembled creation in the window of his Castlebar chocolate house inspired the Connaught Telegraph headline: “Choccy Ár Lá”.

Schonkeren will be shouting for Mayo from the Canaries, but he had “Sam” touched up with edible silver powder in Helena’s Chocolates before he left.

He may find company in Fuerteventura, for Mayo supporters criss-cross the Equator and many datelines. What’s more, the county team has a US vice-president on its side.

Earlier this week, Barack Obama’s right-hand man Joe Biden was presented with a framed and signed Mayo jersey by GAA county chairman Mike Connelly when he turned a sod in Castlebar for the Mayo Roscommon Hospice Foundation.

Mr Biden has Mayo and Louth roots, and in his moving speech the former vice president quoted his late mother Catherine Eugenia Finnegan – “as long as you are alive, you’ve an obligation to strive”. Her motto, which could be applied this weekend, was “you never give up, you never give in”.

“But Mayo has to be realistic,” Paddy Prendergast, one of the last three surviving members of the All-Ireland winning team in 1951, told The Irish Times. “It needs a bit of a prayer and a trip up Croagh Patrick this time.”

Mr Prendergast, who is treated like royalty in his adopted county of Kerry, won’t be travelling to Croke Park this year, but expects he will get a far better “Hawk-Eye quality” view from his television at home in Tralee. He expects his fellow 1951 team-mate, “flying doctor” Dr Pádraig Carney will also be watching it from the US.

“I can’t feel very confident, because Dublin has an exceptionally good team, and it has all the support it needs in terms of training and facilities,”Mr Prendergast says.

He believes emigration and migration is taking a heavy toll on clubs beyond the Shannon, and creating an unequal field of play.

“Outside of Dublin, you just don’t have the same choice of players, the same level of investment in facilities, and players have to travel long distances to train,” he said. “It is time that Dublin was split into two.”

“Or three!” suggests Dr Michael Loftus, former GAA president and a substitute on the 1951 team. “Just look at the size of Dublin’s population, and that says everything.”

Dr Loftus has been attending All-Ireland football finals since 1945, and his father, Martin, a Garda sergeant, died after a heart attack during a national league final between Mayo and Kerry in Croke Park in 1972.

Dr Loftus has two grand-nephews playing on Sunday – Conor Loftus, who is on the Mayo senior team, and Ben McCarron who is on the Derry minor team. His son, Cllr Michael Loftus will be driving him up to Croke Park on Sunday, both hoping that Galway’s minor and senior hurling successes bring good fortune to the neighbouring county.

“I think it will be close enough – Dublin have the speed and athleticism, Mayo have the experience,” Dr Loftus says.

“If we can bring the Liam MacCarthy cup and the Sam Maguire west of the Shannon, and if the Mayo ladies football team wins in their final against Dublin on 24th, it will be a unique occasion – we will be lost for words,” his son says.

Mayo fans travelling east leave a sodden county, with land drenched in rain, but the forecast is for fine weather on Sunday. Those without tickets have been offered “big screen” seats by Love Castlebar in the town’s main street.

In a week when six people lost their lives on the road – including three generations of one family in Mayo – GAA president Aogán Ó Fearghail has joined the Road Safety Authority and road safety officer in a joint appeal to exercise caution and avoid speeding while travelling to and from Croke Park.