Deal will see wage rises of between 6.2% and 10%, depending on when person was hired 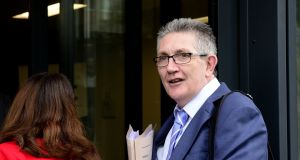 Members of the Irish Nurses and Midwives Organisation (INMO) voted in favour of the new deal by a margin of 75 per cent to 25 per cent.

Doctors who are members of the Irish Medical Organisation (IMO) backed the agreement by 85 per cent to 15 per cent .

The Civil Public and Services Union (CPSU),which represents lower-paid civil servants, supported the proposed accord by 72 per cent to 28 per cent.

Members of the Irish Federation of University Teachers (IFUT)backed the deal by 93 per cent to 7per cent.

Under the proposed deal 250,000 people recruited before 2013 will see pay improvements ranging from 6.2 per cent to 7.4 per cent over the next three years.

For 50,000 people taken on after 2013 with less attractive pensions, the gains will be between 7 per cent and 10 per cent. However, 23,000 workers, including gardaí who can retire early on full pensions, will benefit least from the new accord.

The INMO said it would now seek immediate engagement on the issue of recruitment and retention difficulties facing nursing and midwifery.

It said it had received a commitment that the Public Service Pay Commission, which will examine the issue, will produce a first report involving nursing and midwifery in the second quarter of 2018 and that health service management would take part in talks within four weeks after that on the implementation of all measures – including pay issues – that were recommended.

IMO president Dr Ann Hogan said while the union had recommended acceptance and members had voted in favour of the agreement, “ there remained serious concerns amongst doctors in relation to the crisis of recruitment and retention of doctors in our public health services”.

CPSU general secretary Eoin Ronayne said: “While the agreement goes a considerable distance to restoring pay and removing in part the pension levy, returning income levels to above 2008 , it is nevertheless clear that our members remain angry over the imposition of the unpaid additional hours which were not addressed in the deal”.

The new pay deal will be formally ratified by the public services committee of the Irish Congress of Trade Unions on Monday. The first pay rises will come into effect in January.

The agreement had previously received support from members of unions such as Siptu, Impact, the Public Service Executive Union and the Association of Higher Civil and Public Servants.

However two teaching unions, the Irish National Teachers’ Organisation (INTO) and the Teachers’ Union of Ireland (TUI) have rejected the proposed accord. Another large teaching union, the ASTI, has urged its members to reject the proposed agreement but will not begin a ballot until next month.