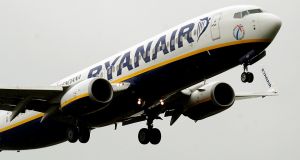 Ryanair says it intends to cancel 40 to 50 flights a day over the next six weeks because its staff need to catch up on holiday entitlement. File photograph: Rui Vieira/PA Wire

Ryanair says it intends to cancel 40 to 50 flights a day over the next six weeks because its staff need to catch up on holiday entitlement.

The airline angered passengers by cancelling more than 160 flights across Europe without notice or explanation on Friday.

Scores of passengers deluged the Ryanair Twitter handle on Friday seeking an explanation for the cancellations. Ryanair only responded by stating that it was as a result of “circumstances outside our control”.

Eventually Ryanair issued a statement on Friday evening saying that it needed to cancel the flights to “improve its system-wide punctuality which has fallen below 80 per cent in the first two weeks of September through a combination of air traffic control capacity delays and strikes, weather disruptions and the impact of increased holiday allocations to pilots and cabin crew as the airline moves to allocate annual leave during a 9 month transition period (April to December 2017) to move the airline’s holiday year (currently April to March) to a calendar year (Jan to Dec) from 1st January 2018 onwards”.

Ryanair spokesman Robin Kiely said the cancellations amounted to two per cent of the airline’s 2,500 flights and the goal will be to restore its on-time performance to its 90 per cent average.

He added: “Ryanair apologises sincerely for the inconvenience caused to customers by these cancellations. Customers will be contacted directly about this small number of cancellations and offered alternative flights or full refunds.”

Among the cancellations were 17 flights in and out of Dublin Airport . Departures to Tours and Newcastle on Friday and two flights to Barcelona, and one each to Madrid, Amsterdam, Edinburgh and London Gatwick on Saturday have been cancelled.

Arrivals from Rome, Tours, Newcastle and Paris Beauvais on Friday and flights on Saturday from Barcelona, Madrid, Exeter and two to Amsterdam have also been cancelled.

Angry passengers complained that no explanation was forthcoming from Ryanair about the cancellations on Friday.

One tweeted the airline: ”#ryanaircancellations unacceptable to state cancellations due to issues outside of your control without giving an actual reason.”

Another, whose flight from Manchester to Krakow was cancelled on Monday, tweeted: ”I’ve just an email saying my flight home on Monday is cancelled. Can you help please?”

Another wrote: ”My flight from Stansted to Pisa tomorrow has been cacnelled. Still showing up as scheduled elsewhere. What’s going on?”

A fourth tweeted: “I want to rebook my flight that you’ve cancelled from Bologna and can’t reach your customer service live chat. Can you help?”