For Kilkishen, a village of about 500 people in Co Clare, read Ireland as a whole

With a few days to go in the Eight Amendment campaign both campaigners are looking for the all important undecided voters. Video: Reuters 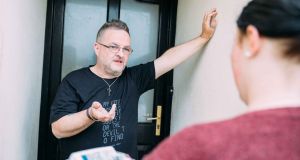 Rita Madden struggles for a moment to recall how she voted in the marriage equality referendum three years ago. It was a Yes, she finally remembers, with a laugh. “But this is a different thing altogether.”

Ms Madden is standing in the doorway of her home in Kilkishen, debating the rights and wrongs of repealing the Eighth Amendment with Rose Anne White and Jordan Cassells, who have spent the weekend in villages around this part of east Clare campaigning for a Yes vote in next Friday’s referendum.

“You listen to everything people on both sides are saying, but to me a life is a life,” the 70-year-old housewife and No voter says, when the campaigners have moved on to the next house. “It’s not a moral issue or anything. I’m not against abortion if one is necessary, but a baby is a baby.”

Down the street, Liz McInerney takes a different view. “I’m against abortion, but I want to choice to be there,” says the 68-year-old, who is also a housewife. “If Savita [Halappanavar] had been able to have that choice she could be alive now.”

I cast my first vote in the 1983 referendum that inserted the amendment into the Constitution. I remember horrifying my mother when I told her I was voting against

Ms McInerney and her husband and daughter will be voting Yes on Friday. And she would like people to talk about it more. “I brought it up in the pub the other night, but Liam [her husband] said this wasn’t the place to be talking about it. But why not?”

Two women from the same generation, living in the same village, holding differing views on repealing the amendment suggest the issue is neither old versus young, urban versus rural, or as female-v-male, as is sometimes argued. Instead, it is dividing generations, villages and families just as it divides urban and younger voters. For Kilkishen, a village of about 500 people, read Ireland as a whole.

I have come to this part of Clare to see how the referendum campaign is being greeted on doorsteps because I grew up around here. I cast my first vote in the 1983 referendum that inserted the amendment into the Constitution. I remember horrifying my mother when I told her I was voting against. Clare voted in favour by a majority of 74 per cent. The county also voted against introducing divorce in 1995, by 56 per cent.

Five years ago I returned to Ireland after a quarter of a century living overseas, and found a country in the middle of a social transformation. The high point of this modernising, liberalising wave was the marriage referendum. That moment generated headlines around the world, just as this one is doing, though for different reasons.

Clare said Yes to gay marriage by 58 per cent, below the national Yes vote of 62 per cent. But that referendum, as Ms Madden says, was “a different thing altogether”. In the end, it was about love and marriage, and who could say No to that?

The risk for those arguing for repeal of the amendment is that Ireland’s modernising wave peaked in 2015. Yet after three days with campaigners in the villages of east Clare, it is impossible to judge whether that will be the case.

Dublin is the symbol of Ireland’s transformation, becoming a vibrant European capital over the past 25 years. Yet rural Ireland has changed, too. “Culchies Yes Together” was a badge being handed out in O’Brien’s Bridge on Saturday by Geraldine Exton, a civil servant.

People are not stuck in rural Ireland any more. They have more exposure to different ideas than they did even 15 years ago

Many villages around here have something they did not have in 1983 – new housing estates, with new residents, many of them working in the urban conurbation of Ennis, Shannon and Limerick. Some of them may not even originally be from villages such as Kilkishen, Bridgetown, Broadford, O’Brien’s Bridge and O’Callaghan’s Mills, all of which were targeted by the Yes campaign at the weekend.

“The urban-rural divide is not as black and white as you would think,” says Rebecca Doyle, the 26-year-old technology worker who is spearheading the Yes campaign around here. “People are not stuck in rural Ireland any more. They have more exposure to different ideas than they did even 15 years ago. The bubble of rural Ireland does not exist to the extent that it used to.”

Still, the most common response on doorsteps last weekend was no response. Partly this was due to the rain that fell with increasing ferocity during Sunday afternoon; partly campaigners were competing with local events that were more important in villagers’ lives, such as an under-14 hurling match between Broadford and neighbouring Tulla on Friday evening, or the even bigger clash between Clare and Cork on Sunday.

In all five villages, the majority of doorbells were not answered. In Kilkishen, 109 of the 195 houses canvassed did not respond. Of those that did, 22 were No, 18 were undecided, and 40 were Yes. Of the 96 houses in O’Brien’s Bridge, 56 were not in, 26 were for Yes, six were undecided, and five were No. Of the 12 houses in an estate in O’Callaghan’s Mills, seven did not respond.

“I don’t know why I am disappointed when people are not in – I’m never at home myself,” says Esther Walsh, who was part of the Yes campaign at the weekend.

Yet people are making up their minds, nonetheless. Last week, Jack Byrnes was in the No camp. Yet on Saturday, the therapist from O’Brien’s Bridge said he and his wife and daughter had decided to vote Yes, after a long family discussion. “Two reasons, really,” he said. “First, the right of women to control their own bodies. Second, I trust the Oireachtas. I don’t think they will introduce a policy like the one in England. ”

Ms Madden is not so sure. If one votes Yes, “it’s a final decision,” she says. “If you vote No, there is the possibility of alternative choices at some point in the future.”

Nor, she insists, will a No vote mean that Ireland is no longer the kinder, gentler country she believes it has become. “Voting No does not mean we are not a modern country,” she says. “But this is a very, very big decision.”