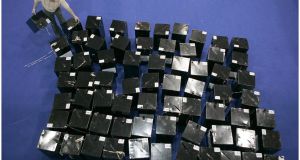 AS many as four referendums could be required to bring about a united Ireland. File photograph: Dara Mac Dónaill

A united Ireland could necessitate at least three referendums and possibly four, constitutional experts have said.

A working unit has been set up comprising of 13 academics from England, Northern Ireland and Ireland to examine how a united Ireland might come about.

Dr Alan Renwick, the deputy director of the Constitution Unit at University College London (UCL), stressed that the group will not be looking at the merits of the argument for or against a united Ireland, but only on how such a process could be conducted.

The Belfast Agreement provides for a border poll if the Secretary of State for Northern Ireland deems that one is appropriate.

Dr Renwick said there will also be a need for a poll in the Republic as a united Ireland will necessitate a constitutional change.

Article 3 of the constitution states that a united Ireland “shall be brought about only by peaceful means with the consent of a majority of the people, democratically expressed, in both jurisdictions in the island”.

He stressed that there may also need to be a confirmatory referendum when the details of what a united Ireland might look like are agreed.

These might be one poll North and south, separate polls in both jurisdictions, or just a poll in the Republic to vote on the necessary constitutional changes.

The most recent opinion poll on the prospects of a united Ireland showed a narrow majority (51 per cent v 49 per cent) in favour in Northern Ireland.

The result of Lord Ashcroft’s poll for Conservative Home shows views remain polarised with 98 per cent of nationalists in favour of unification and 95 per cent of unionists against.

Dr Renwick said both the Irish and British governments are reluctant to engage in preparation for a border poll given the political sensitivities involved at the present time.

Therefore, an independent study of how a united Ireland might arise is necessary as Brexit has made the prospect of a border poll more likely.

“Different polls are showing different things, but there is a drift in the poll towards unification and Brexit is having a clear effect on driving greater support for unification, but most polls suggest there is still a majority for staying in the UK,” he says.

He believes Brexit showed how not to carry out a referendum campaign with an “ill-designed process that has left parliament feeling bound to implement an imprecise instruction from the electorate. That it went so badly is one of the spurs to think about this issue of a united Ireland.

“Irrespective of what you think of the result of the Brexit referendum, it has failed to produce clarity, confidence and legitimacy.”

Among the issues that the group will deal with is the question of when a border poll should be triggered and what objective evidence would be used for the Secretary of State for Northern Ireland to call such a poll.

On what basis should a referendum be held in the Republic?

Should it be held on the same day as a poll in the North as the Belfast Agreement referendum are held or at a later date?

What would happen if the North voted for unification and the Republic voted against?

Professor Renwick said one issue that will also demand attention is whether or not a referendum should happen in Northern Ireland after or before negotiations with interested parties.

He suggested there was no guarantee that unionists would participate in such a process in the first place.

The Constitutional Unit will issue a report in a year’s time. The other members of the unit are Alan Whysall (UCL), former Irish Times journalist Dr Paul Gillespie from UCD and Dr Oran Doyle, Dr David Kenny and Dr Etain Tannam from TCD.

1 Covid-19: Two-week quarantine period for arrivals into State could be lifted for some
2 The momentum behind calls to ease lockdown may become irresistible for politicians
3 Irish planning for no-deal Brexit to restart as EU-UK talks go badly
4 New rules for arrivals to Ireland start today - what is changing?
5 Emily Maitlis thanks BBC viewers for support after Cummings row
Real news has value SUBSCRIBE