On this day, 1939: Crime at home, ‘wave of terrorism’ abroad and lots of classifieds 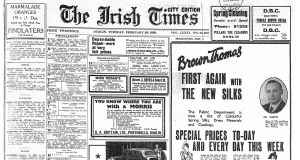 In Birr District Court, a man who had been shot in the face gave evidence against the man charged with the crime. According to a news story published on February 28th, 1939, Samuel Albert Watkins said he had an argument with the shooter, Michael Clarke, before the incident. A couple of weeks later, the two met again near Leap, Aghacon, and Watkins admitted to hitting Clarke: “I asked him: ‘Who are you looking for, are you looking for me?’ He made no reply and I struck him in the face and staggered him back. The next thing he told me: ‘Take this,’ and I heard a shot and felt something strike me. He shot me on the left side of the face.”

A woman named Ms M Fowler told the court: “Watkins and Clarke were rival suitors for my hand. Watkins used to resent Clark coming up from Ballincor.” Ms Fowler had encouraged the attentions of the young bachelor Clarke and had already rejected a proposal by Watkins, a widower aged 39. Clarke was allowed bail.

Another domestic crime featured prominently on page 9 on this day 81 years ago. A 30-year-old labourer named Patrick Monaghan appeared at Balbriggan District Court, charged with murdering “middle-aged spinster” Elizabeth “Lily” McAvoy. The woman’s body was discovered outside her one-roomed cottage down a boreen about a mile and a half from Swords town.

Evidence was heard that Monaghan was worse for drink on the day Lily - described as “eccentric” - was killed, and a belt found near her body matched one which Monaghan wore on a black coat he owned. Monaghan was also seen arguing with and assaulting the woman along the Brackenstown road the day before her body was found. Monaghan was remanded in custody to appear in Naas court the following Wednesday.

In foreign news, “a fresh wave of terrorism” had left more than 30 people dead in Palestine following a day in which 14 separate bomb, landmine and shooting incidents were recorded. In Europe, it was reported that the British and French governments had decided to recognise General Franco, with America expected to follow suit.

The front page, as was the style prior to 1941 in The Irish Times, was reserved for classifieds on this day in 1939. Brown Thomas evidently bought the most real estate: “First again with the new silks” tops the most spacious notice covering nearly half the page, complete with illustrations of various patterns and a headshot of Mr Martin, the store’s silk buyer.

The classifieds that day were a miscellany typical of the time: an accountant seeking employment, ads for sea trips abroad - “USA & CANADA CALLING!” from £27 5 0 return - and spurious investment opportunities: “£2,500 REQUIRED for completion of sound investment scheme, house property. Address Z 1559 Money, this office.” That’s all the information provided.

In other news, the minister of agriculture had decided to dissolved the Pigs Board - or the Northern Ireland Pig Marketing Board. A report on the board had left the minister “gravely perturbed” and revealed “serious laxity in the control and expenditure” of funds. A new body was to be appointed in its place. In Wicklow, a farmer discovered the body of 35-year-old John Foster in a snowdrift at Glenmacnass the previous day. The man’s footsteps were traced, and it was concluded that he had been making for Laragh, having come from Blessington, and lost his way.

Meanwhile, the new Dublin coroner JP Brennan was appealing his salary of £300. It was proposed that it be raised to £400 and the matter ultimately was referred to the council’s finance committee. On the same page as the council report, actor Yvonne Arnaud received glowing praise for her performance in Plan for a Hostess at the Gaiety.

In sport, British middleweight boxing champion Jock McAvoy had knocked out France’s Emile Lebrize within one round in Manchester the previous evening. The Senior Cup got its mention after both of the previous year’s finalists were defeated in the first round; Belvedere lost to Clongowes and Newbridge defeated Castleknock.

The paper finished as it started, with classified ads – among them, a context-free Bible verse, Acts 16 31: “BELIEVE on the Lord Jesus Christ, and though shalt be saved.”