In 1869, a trip to Carrickmacross turned deadly after a boy stumbled upon a parcel of provisions on the road home 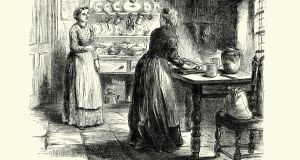 Mary gave a piece of the potato cake to a young neighbour who visited the house in Meath. Illustration: iStock

On the day before he died, Nicholas Ledwithe went to the market at Carrickmacross. Taking an ass and cart, he went for the purpose of carrying goods back to the home of his neighbour Margaret McCormack – a huckster and keeper of a small shop in Drumconrath, Co Meath. Margaret accompanied Nicholas, whom reports called a “young lad” – death records show he was 16 years old.

It was 3pm on Thursday, October 7th, 1869, when the pair left the market and set out for home. About three miles outside the town, Nicholas spotted a paper parcel on the road. He climbed off the car, picked it up, and handed it to his companion.

“If it is tea and sugar, Nicholas, you’ll have a supply for a month,” Margaret – aged in her 60s – said to her helper, according to one report in the Irish Examiner.

It was better than tea and sugar. Margaret loosed the package, and inside they found a small parcel of currants, a small packet of biscuits and a bag of flour weighing about 3.5lbs. The package was returned to Nicholas, who brought it home and gave it to his sister, Mary. She, in turn, put it away under lock and key until the following morning.

Mary rose early and used the ingredients to make the potato cake that poisoned her family at their home in Rathlagan, Lower Slane, killing two of her siblings and her father.

The meal Mary prepared with the chanced-upon, lethal provisions was “sufficiently large to afford the entire family a good breakfast”. Nicholas, his older brother Andrew (36) and the siblings’ father, James (70), all “took a very hearty meal” that morning, while Mary herself had a small portion. A piece was broken off and given to a visiting neighbour, a young girl, who happened to arrive during breakfast.

Another constable named Lamb found a 7lb bloodied weight in the bedroom, believed to be one of the weapons used in murdering the woman

“Half an hour later the three men became ill, and were attacked by a most violent retching and partial purging. Mary Ledwithe was also seized slightly at first, but became gradually worse during the day,” reads the Examiner report. The three men died, while Mary and the neighbour were ill, but had not ingested enough of the ingredients to kill them.

The incident was suspected to have been intentional. The parcel, it was thought, had been planted on the road, or “maliciously placed for an evil purpose”, according to one official record.

But there was no proof. At least, nothing official. No convictions followed the poisoning of the Ledwithes and their young neighbour. The case dropped away from news again until another brutal murder a few months later – that of Margaret McCormack, the shopkeeper who rode with Nicholas to Carrickmacross on the day he found the parcel.

Constable David Robb was the first policeman to arrive at Margaret’s house early on January 7th, 1870. He found Margaret dead in her bedroom, “on the floor with marks of violence on her head; blood was also on the pillow”. The roof above her room had apparently been pulled down. Her skull was broken above her left eye.

Another constable named Lamb found a 7lb bloodied weight in the bedroom, believed to be “one of the weapons used in murdering the woman”, according to The Irish Times. A hole in the roof above her bedroom and footprints in a dunghill beside the house gave a clue as to the point of entry of the assailants.

Bridget Clarke, examined at the inquest at Drumconrath Courthouse on the 10th, was in the house at the time of the murder.

Bridget had lived with Margaret for two months prior to her death; the former slept in the kitchen and the latter in an adjoining room. On the night of the 6th, they went to bed at 8pm. A scream from Margaret’s room woke Bridget at about 3am.

She went to Margaret’s door “but found it secured, as also the kitchen door, which was fastened on the inside as well as the out”. Bridget sat in the corner of the room until she observed two “shadows, like men” disappear through the roof. The timber and thatch then fell in on Margaret’s body.

Bridget made her escape through the front door and raised the alarm at the nearby house of a man identified as Peter Ledwitch, according to an Irish Times report. The neighbour’s second name, in this case, is a variant spelling of “Ledwithe”, and both appear interchangeably in different reports and records about the two crimes. His exact relation to the group that were poisoned is unclear from newspaper reports, but a sibling of his did appear to be tied up in whatever row had led to the bloodshed.

Four arrests were made in the aftermath of Margaret’s murder and before the inquest, though records indicate that, as with the poisonings, nobody was convicted.

One of the men arrested at Mullamore was detained, one sub-constable said, because he had blood on his shirt, which the man said he got from a cattle he attended; “[I] would not have arrested him but for the blood marks on his vest; prisoner’s character was always good,” said the policeman.

Peter’s testimony at Margaret’s inquest indicated a bitter feud in the district, on one side of which appeared to be the shopkeeper and the poisoned family. He mentioned that Margaret had, with the help of his own sister, been involved in burying a “sheath” for the sister of one of the arrested suspects.

The practice, according to material hosted on duchas.ie, involved arranging a sheaf of green oats into the shape of a human, and sticking needles in the “joints”. The sheaf was waked for three days by candlelight, then buried on the border of the townland where the target lived. As the material rotted in the ground, the health of the person for whom the sheaf was buried was supposed to have declined. When it decayed entirely, the target would die.

Nineteenth century Ireland was no stranger to unsolved “outrages”

This account is reflected in Peter’s own understanding of the ritual: “...he heard that the effect of burying the sheaf was a lingering death to those for whom it was interred,” reported The Irish Times.

An official summary record simply says of the murder of Margaret McCormack: “Every effort to trace the perpetrator failed.” Of the poisoning, records conclude: “The motive was involved in mystery” – a recurring line in outrage reports where no criminal could be detected, or nothing could be proved.

The two cases would be mentioned again by officials, however, in the context of the supposed “mystery” surrounding them, and others, in Co Meath. As it happens, the two cases were just small components of a bloodier tapestry.

Nineteenth century Ireland was no stranger to unsolved “outrages” – which included murders, intimidation, assaults, firing at people, among other aggressions. Many outrages in those decades were agrarian in nature, or resulting from dispute to do with land.

The state of the country was often remarked upon by judges at quarterly court sessions. Co Meath, in the months following the above unsolved killings, came in for special mention by James Henry Monahan, the Lord Chief Justice of the Common Pleas.

“Gentlemen of the Grand Jury of the county Meath, I never in my life addressed a grand jury under the influence of greater regret, or more serious consciousness upon my part of my inability to do justice to the cases before me,” he declared in March 1870, according to a report in the Drogheda Conservative.

Monahan said that “the number and magnitude of the offences that have been committed in your county even since the last assizes are such as to make one tremble when contemplating the state in which this county must be”.

The case of the poisoned Ledwithes and the murdered huckster were again pointed out, with exacerbation on the judge’s part. Other unsolved Meath outrages included the murder of a police pensioner, and another case in which a carriage containing a lady was fired upon, with one man killed (“There was a time, gentlemen, when the presence of a woman was some protection to the man with whom she was in company...”)

At the lesser end, there were also about 60 or 70 cases of threatening letters with nobody to answer for them.

Silence among the communities and potential informants, the judge said, was hopefully to blame.

“I hope, with all my heart, that the difficulty of discovering crime proceeds in a great degree from apprehension and fear upon the part of the persons capable of giving evidence; and if it should be so, it will not be of long continuance,” he said.

“I hope sincerely that this reign of terror will soon pass away.”