A fire death, tenament collapse and a lost WW1 medal; the story of James Murray 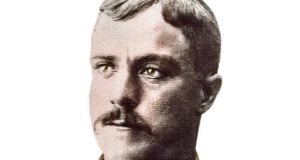 On June 12th, 1963 a Dublin Corporation tenement building in Fenian Street, Dublin collapsed leading to the death of two young girls who were playing on the streets outside.

The tragedy, preceded by another tenement collapse in Bolton Street 10 days before, galvanised the corporation into rehousing hundreds of its tenants who were living in sub-standard accommodation.

Jane Murray, a widow for the previous 14 years, lost most of her possessions in the Fenian Street collapse and with it was presumed her husband’s first World War victory medal.

James Murray was a decorated war veteran who had won the Military Medal during the war and was commended for his bravery twice by Major General William Hickie, who commanded the 16th (Irish) Division during the battles of Messines Ridge and Passchendaele in 1917. (Watch: The Irish at Passchendaele)

Prior to his involvement in that conflict, James Murray served with the Royal Dublin Fusiliers in the Boer War. After the war he returned to civilian life.

In 1909 he and his mother were involved in a tragic incident which led to them being among the first to be prosecuted under the 1908 Children’s Act. His mother left her grandson, also called James (then four), alone for a few minutes in the house. When she returned, he had fallen into an open fire and died later from his burns.

In 1916, just before the Easter Rising, James Murray rejoined the British army and his old regiment the Royal Dublin Fusiliers. He finished the war in the Army Labour Corps usually reserved for those who are not physically or mentally able to fight anymore.

After being demobbed, he and his family moved into the tenement in Fenian Street. He died in 1949.

His great-grandson, Dr John Murray, a palaeontologist at NUI Galway, is used to delving into the past, but not the immediate past.

When he posted on the Great War forum that he was looking for the medal, he had not realised that someone else had posted on the same forum about the medal eight years previously.

Gerard Del Delaney, originally from Dublin and now living in the UK, inherited the first World War victory medal which bore James Murray’s name and regimental number on the rim.

He had no idea how the medal came into his family. After being introduced over the internet, the pair met at the Royal Dublin Fusilier’s Arch in St Stephen’s Green and Mr Delaney handed over the medal.

“My entire family had believed that so much of the story had been lost, particularly in the Fenian Street tenement collapse,” said Dr Murray.

“We are all deeply grateful to Del for very kindly returning James’s Great War medal and providing us with a tangible link to our shared past. This literally feels like finding a needle in a haystack.”

Last year he visited the sites in Flanders where his great-grandfather had fought 102 years previously. “ I stood on the same ground that James crossed he went into battle at the opening of the Battle of Messines in 1917. An equally unforgettable experience.”