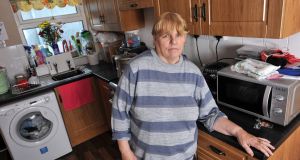 The housing crisis in Dublin may make more headlines, but the problem is not confined to just the capital with the combination of rising rents and shortage of housing stock is putting greater strain on local authorities throughout the country to provide social housing.

One such local authority is Cork County Council and one woman who has been waiting for social housing for more than a decade is Margaret O’Driscoll who lives with her daughter Sylvia and her partner, Issac Hussein Said and the couple’s two-year-old daughter Mia.

“We’re living in a two-bedroom council bungalow here in Scartagh in Clonakilty. Mia sleeps with me in one room and Sylvia and Issac have the other room. But the place is tiny and we haven’t room to swing a cat here in the kitchen, it’s like a matchbox,” she said.

Ms O’Driscoll said Sylvia has been on a council waiting list for over 10 years but nothing has come up. She said she herself has applied for a transfer to a three-bedroom house so her grandchildren could visit but nothing is available.

Sylvia is looking for a house for herself and her partner and daughter close to her mother, who is a diabetic. She said she doesn’t want to move to neighbouring towns like Skibbereen and Bandon even if housing there became available.

“We would look at private rented accommodation but because of our Traveller background, no private landlord would take us. So we’re dependent on the council and we’re living with my mom while we’re on the council housing list and waiting nearly 12 years.

“It’s very tight here. I wanted to get some toys for Mia for Christmas but we don’t have any room to store them . . . We really need our own place with a bit of space,” she said.

According to local Sinn Féin Cllr Paul Hayes, who has been assisting the O’Driscolls in their bid to secure housing, they are just one of 2,100 applicants on the council’s housing list in west Cork where the private rented sector is no longer an option for many families.

“I could think of several people on the council waiting list who have been waiting years – particularly single men who have no chance of getting a house while in the private rented sector. It’s a landlords’ market where rents have gone up and up over the last two years.”

According to Cork County Council, there were 4,804 on the council’s housing waiting list in 2013. Figures obtained by Fianna Fáil’s Barry Cowen under a Freedom of Information request reveal there are now 7,133 on the list – an increase of more than 48 per cent in two years.

Threshold South regional manager Niall Horgan, who is based in Cork city, said the agency has so far this year assisted more people in Cork county than in Cork city through its tenancy protection service. “The problem is not just an urban one.”

Mr Horgan said people who become homeless in rural areas gravitate towards Cork city, where Cork City Council provides services if there is no family support available to them in the county.

“We have also seen rent increase across the board,” he said. “It started in Cork city and then spread out to the nearer satellite towns.

“People who are on rent supplement can’t find a landlord to take them in the city because there is no stock and now they are finding it difficult to get landlords in places like Mallow and Midleton to take them so they are having to go further again out into the county.”

Mr Horgan also said there needed to be a redefinition of homelessness as many families who are not in hotel or B &B accommodation but are staying with relatives are technically not classified as homeless when effectively they are.