60 years on: Why Irish soldiers who died in Niemba did not get medals 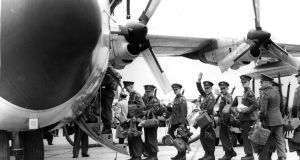 Irish soldiers board a plane to leave Baldonnell airport for Congo as part of a UN peacekeeping mission on July 28th, 1960

Medals for gallantry for nine Irish soldiers killed in the Niemba ambush 60 years ago were not awarded because it might look like a “hand-out”.

This has emerged in a 1968 letter written by the former chief of staff of the Defence Forces Lieut Gen Sean MacEoin which has been released to The Irish Times by the Military Archives coinciding with the anniversary of the ambush.

The Niemba ambush, which occurred on November 8th, 1960, was the first incident in which Irish soldiers serving with the United Nations (UN) lost their lives in combat.

Shortly after the ambush, a national campaign began to award the men involved in the ambush the military medal for gallantry, the Defence Forces’ highest honour.

A platoon of 11 men from A Company of the 33rd battalion were ambushed by Luba tribesmen, known as Balubas, at a bridge near the village of Niemba in the Congo.

The Irish troops were in the country following a request by the UN for peacekeepers. The resource-rich Katanga province had broken away from the newly independent Republic of the Congo. The Irish were sent over to protect civilians and government installations.

The men, led by Lieut Kevin Gleeson, went to repair a bridge which had been destroyed by Luba tribesmen who were trying to stop incursions into their territory by Katangese troops supported by Belgian mercenaries.

Eight of the men were killed on the spot, mostly by arrows tipped with poison. Trooper Thomas Kenny and Private Joe Fitzpatrick escaped the fight and made their way back to safety.

Another man, Trooper Anthony Browne, was reported missing, presumed dead. It was believed afterwards that the Irish troops were killed in a case of mistaken identity as the Balubas believed they were hostile foreign mercenaries.

The funerals of the eight men who died at the scene and another soldier who was killed in a separate action were among the biggest that Ireland had ever seen.

However, the former chief of staff of the Defence Forces and commander of the UN forces in the Congo during 1961 and 1962, Lieut Gen MacEoin, said any award of medals could not be made in the atmosphere of “emotionalism” generated by the ambush.

Writing in 1968, MacEoin stated the awards of medals to those involved in Niemba might lead to fresh criticism of how Ireland’s operations in the Congo were conducted, according to the newly released letter.

MacEoin told then minister for defence Michael Hilliard that a military medal for gallantry or a distinguished service medal (DSM) cannot be automatically awarded to a soldier who dies on duty.

Instead, it can only be awarded for conduct that is “distinguished” or “meritorious”.

Death that occurs as a result of neglect or cowardice could reduce any award to “ridicule” and it would lose all “meaning and value”, he believed.

The actions at Niemba were examined by two successive army boards and neither recommended the awarding of medals to those involved.

Those killed in the Niemba ambush were finally given medals in 1998, but only as part of a general award to all Irish soldiers who died on UN duty overseas

He continued: “It is not the practice to provide for the posthumous award of a decoration unless the award is warranted by acts of service of the individual prior to his death in the circumstances leading to his death.”

Similarly, MacEoin believed the awarding of posthumous medals to all those who died on active duty with the UN was unwise as such deaths could arise from “misconduct, cowardice, disobedience or neglect”.

He also ruled out a memorial to those who died in the ambush as it might be construed as an insult by relatives of those involved if it was not accompanied by a medal ceremony too. Such proposals, he concluded, could “do more harm than good”.

Those killed in the Niemba ambush were finally given medals in 1998, but only as part of a general award to all Irish soldiers who died on UN duty overseas.

The only posthumous award arising out of the Niemba ambush was the military medal for gallantry for Browne, who was missing presumed dead when he received it in 1961.

The citation stated that he had “endeavoured to create an opportunity to allow an injured comrade to escape by firing his Gustaf [submachine gun], thereby drawing attention to his own position which he must have been aware would endanger his life”.

The story developed that he, a single man, had given his life to save Kenny, who was a married man with a child. Browne’s body had been carried away from the ambush site by the Balubas in tribute to his courage.

This narrative was challenged in later accounts of the ambush after Browne’s body was identified 5km away from the ambush site by an Irish search party in 1962.

He had escaped the ambush and ended up some days later at the outskirts of a village where he asked for food and water. He was set upon and killed by local tribesmen and beaten to death.

Both Kenny and Fitzpatrick received apologies in the Dáil from the then minister for defence Willie O’Dea in 2006 arising out of the official army report into the incident.

The ambush was the subject of a bestselling book, The Peacemakers of Niemba, by then Irish Times journalist Tom McCaughren, which was first published in 1966 and republished in 2013.

McCaughren wrote to the Department of Defence seeking to write a book “based on official fact” which would be “eminently more desirable than unofficial accounts in English Sunday papers”.

He offered to submit his draft to the taoiseach or the Department of Defence at the time.

His request was granted. A number of changes were recommended to his text including a claim that an (unnamed) soldier was only 16 years of age. Such a claim “admits to a breach of regulations which may prove embarrassing”, an official concluded.

A claim that the ambushed men had “the words of a Hail Mary on their lips” was dismissed as neither “factual nor probable in the circumstances”.