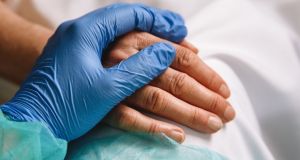 Chronic heart disease was by far the most common underlying condition among those who died with Covid-19. Photograph: iStock

More than 93 per cent of people who died with coronavirus in the State had an underlying condition (1,568 people), according to Central Statistics Office (CSO) data released on Friday.

The vast majority of the 1,568 people with an underlying condition who died with the disease were aged over 65 (1,450 people) with the median age at 83, the CSO’s latest Deaths and Cases Bulletin series shows. Of the 133 deaths among people aged 25-64, 87 per cent (116) had underlying conditions.

The figures show more than 10 people have died from the virus in each week of the last eight weeks. There has been a sharp decline in the hospitalisation rate of people with the virus. Of the 3,881 confirmed cases during the final week of October, 126 were admitted to hospital and less than five to ICU. This compares to the 688 people who were hospitalised the week ending March 27th with an additional 95 people admitted to ICU.

Figures show the 25-44 age group still accounts for the highest number of confirmed cases. In the week to the end of October, the median age for a new confirmed coronavirus cases was 33 years, according to the data.

The number of weekly confirmed cases was less than 5,000 cases for he first time in four weeks up to October 30th, the CSO said.

Cases in Dublin remained high with the capital accounting for 31 per cent of all cases (1,202 cases in Dublin) during the last week of October. It was the seventh week in a row that Dublin recorded more than 1,000 weekly cases. Cork followed with the second highest number of cases last week at 570. County trends show that Donegal, Galway and Mayo made up 45 per cent of all cases linked to an outbreak for the week ending October 30th.

While there were 75,837 referrals for community testing during the last week of October, referral numbers have dropped, particularly among the 0-14 age group which fell from 18,629 to 10,935. However, schools were closed for mid-term break during this week.

Outbreaks in private homes have accounted for nearly half of all cases over the past month while nursing homes accounted for 9 per cent of cases and childcare facilities and schools together account for another 9 per cent.

Some 1,679 people were confirmed to have died nationwide by October 30th with an additional 229 deaths cited as having a “probable link” to the virus.

Dublin has had by far the highest death toll from the virus with 833 people dying with the virus in the capital followed by Kildare, where 156 people have lost their lives. Cork has suffered 59 deaths since last March and Meath has also lost 59 people to the virus. Only two counties have not recorded a virus-related death toll, Leitrim and Waterford.

The coronavirus figures show that overall 61 more men than women had died by the end of October. Almost two-thirds of all deaths (64 per cent) were among people who are 80 years of age or older.