Inside Politics: The fraught job of finding an exit route from Level 5 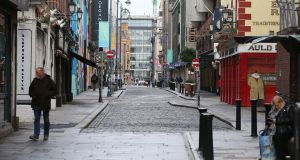 Temple Bar in Dublin, an area of the city centre that is usually packed with visitors. Photograph: Stephen Collins/Collins Photos

Just as it was the first time round, opening up after the Covid lockdown will be vastly more complicated than closing down. As the excitement settles after the rollercoaster in the United States in recent days – to which the entire Irish political class was glued – the management of the pandemic will once again take centre stage in politics over the coming weeks. Far-reaching decisions by Government will be required in short order.

To that end, there are intense rolling debates taking place in and around Government at present, according to conversations with a number of politicians and officials in recent days. Their conclusions will decide how Ireland exits the current lockdown, and possibly what kind of Christmas you have.

The leaders of the three Coalition parties discussed the issue in a meeting last Monday evening, I am told. There was another meeting involving the Nphet honchos, the HSE and senior officials on Wednesday.

Leo Varadkar, ever a student of the numbers, is pretty bullish about opening up. He told his parliamentary party on Wednesday evening there were strong arguments for considering an early reopening in two weeks’ time, citing especially some retail, marts and gyms, the last of which he confessed a personal interest in. By the next day, however, he was more cautious, telling the Dáil that Level 5 restrictions would remain “very definitely” for the full six weeks. “Would the real Leo Varadkar stand up,” a colleague observed.

Taoiseach Micheál Martin and the Green leader Eamon Ryan are more cautious. Though neither man was an enthusiast for the lockdown, neither is in favour of opening up early. There’s “no chance” of an early relaxation, according to one person involved in the decision-making process.

Although all outward signs suggest that the previous public differences between the public health experts in Nphet and the politicians have been smoothed out, I understand that behind the scenes this is not the case. Many of the politicians and their officials believed in October that they were bounced into a possibly unnecessary lockdown by Nphet; now they believe that even more strongly. That can only affect their relationship in the future.

The lockdown was announced – with Dr Tony Holohan and colleagues insisting there was not a moment to lose – on October 19th, just four days after the ban on household visits was introduced in Dublin and the Border counties went to Level 4. But it was also a week or so after there was a step change in Government communications on the issue, and the seriousness of the second wave began to dawn on people.

What many people involved believe is that the lockdown came before the existing restrictions had a chance to have an effect. Talk to people in and around Government on this issue and this is something you hear constantly.

“Level 5 was totally unnecessary,” one senior figure at the centre of the administration told me. The evidence was at best sketchy, the source said.

When I put this to another person in a similar position, they agreed unhesitatingly. So did another person working at a senior level in this area. Their view is that Level 3 – once it was genuinely implemented – was working.

There are divided views on whether the Nphet people knew that the decline in the rate of infections was coming. As it happens, the day the lockdown was announced was the day infections peaked at 1,284; the numbers began to fall the next day, and they have continued to fall. Look at it another way: had Government waited a week, or even a few days, it would have been apparent that the earlier restrictions were working.

Nobody I spoke to, it should be added, doubts for a moment the sincerity and good intentions of Tony Holohan and his colleagues. Holohan has been telling Ministers that it was the expectation of Level 5 that shifted the public’s behaviour; no doubt there’s some truth in this. He has recently told public briefings that it is Level 5 restrictions that are getting the numbers down. This is a view not shared by many people in Government, though.

The Government’s attitude is strengthened by two other developments this week. While the official death toll from the pandemic in Ireland is now 1,930, the Central Statistics Office said this week that it estimates “excess mortality” – ie, the level of deaths above normal – to be between 876 and 1,192.

Nor has there been any significant uptick in deaths in the second wave. Average weekly death rate during the weeks that ended in April (in the midst of the first lockdown) was 282; the average for the last three weeks is 27.

These relatively low numbers are all the more significant because, as hospital consultants warned this week, the shutdown of cancer screening and the curtailment of treatments will inevitably lead to deaths in the future from cancer.

So this is the context in which the decisions about the opening up and about Christmas will be made in the coming weeks. Questions that will have to be answered, and the current thinking, include:

Should it be a Level 2 or Level 3 opening up? (Probably Level 3, and maybe not immediately)

Should it be all in one go, or a graduated opening? (Two stages, perhaps one at the start of December, one a week or so before Christmas)

Should the regulations about visiting homes be completely relaxed or confined to family members? (People are very nervous about home visits, but new research is awaited)

Can pubs open? (Huge nervousness over this, likely to be subject to strict conditions)

Can mass travel into the country be permitted? (Can it really be stopped, is the question some people have asked)

None of this is agreed as yet. Scratchy exchanges between Nphet and the Government lie ahead. A fraught few weeks are in store.

5 ‘Doug and Kamala together are almost vomit-inducingly cute and couply’: The VP’s stepkids speak