‘We want Christmas to be safe, but we also want January and February to be safe,’ says Dr Colm Henry 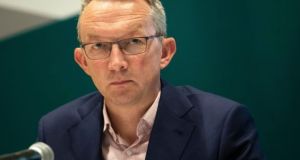 The deaths of a further eight patients with Covid-19 has been reported by the National Public Health Emergency Team (Nphet) this evening. This brings to 1,940 the total number of deaths during the pandemic.

Nphet also reported a further 499 confirmed cases of the virus, bringing the total number of cases to 64,538.

This afternoon, there were 292 Covid-19 patients in hospital including 37 in ICU. There have been 24 new hospitalisations in the past 24 hours.

Dublin now ranks tenth for incidence, at 201.1. The county with the lowest incidence is Leitrim, at 31.2.

Earlier, Dr Colm Henry, the Health Service Executive (HSE) chief clinical officer, said the prospect of people coming together for Christmas was looking good, but Level 5 measures must be continued.

“We want people to come together at Christmas,” said Dr Henry on Friday. But, he warned: “we must see through the measures first” as the figures could change very quickly “if we let up too early.”

The Government announced Level 5 restrictions across the State for six weeks from Wednesday, October 21st until December 1st in a bid to curtail the spread of Covid-19.

“We want Christmas to be safe, but we also want January and February to be safe,” he told RTÉ’s Morning Ireland programme.

The stabilisation of the number of Covid-19 cases gave cause for hope, he said. Ireland was now among only two countries in Europe (with Finland) where the rate is slowing.

People were behind this change in infection rates, especially young people, said Dr Henry, who said efforts were beginning to pay off.

Nursing home outbreaks were still of major concern, he said. Once the virus gets into a care setting it is “virulent and vicious” and that is inevitable when there was widespread community transmission.

“Frankly, the figures are changing week to week. If the people let up then that will change.”

The deaths of another three patients with Covid-19 were reported by the National Public Health Emergency Team (Nphet) on Thursday. This brings to 1,933 the total number of deaths linked to the disease.

Nphet also reported a further 591 confirmed cases of Covid-19, bringing the total number of cases to 64,046.

“Level 5 efforts over the last two weeks have succeeded in further reducing community transmission and disease incidence in Ireland,” according to chief medical officer Dr Tony Holohan, speaking on Thursday. “However, now is not the time to be complacent. We must keep driving down this disease – we must keep going.”

Dr Holohan singled out for praise a “dramatic reduction” in cases among the 19- to 24-year-old age group in the past two weeks, where the incidence has dropped from 450 per 100,000 people to 150.

“They have also halved their contacts in the past five weeks. We all need to recognise the efforts of our young people and I thank them.”

Prof Philip Nolan, chair of the Nphet epidemiological modelling advisory group, on Friday said the public began modifying their behaviour seven to 10 days before Level 5 restrictions were introduced because “the public realised we were in trouble”.

Level 3 restrictions had helped stabilise figures, he told RTÉ radio’s News at One, but those measures did not bring about a reduction in cases, that had come about because of Level 5.

“The Reproductive (R) number is now below one and we believe it is decreasing” he said. Decreasing Covid numbers were “testament to the collective actions that we’ve all made.”

Each case of Covid had infected fewer than one other person, he said. A closer examination of the data highlighted that the number of close contacts for each person had been decreasing since September.

The number of cases in Dublin is decreasing now, said Prof Nolan, who added that it was not unusual for outbreaks to be resistant in a capital city given the population density. “People are doing what needs to be done,” he said.

Prof Nolan said it is important to get virus levels down as low as possible and contain high-risk indoor gatherings to “choke the virus”.

The European Centre for Disease Control would advise Nphet what the high and low level risk situations would be, he said.

On Friday, Dr Henry said the roll-out of quicker Covid-19 testing for places like airports is still being evaluated by the HSE. He said it is unlikely to be ready in time for Christmas.

There is a wide range of fast testing being developed, said Dr Henry, adding that they would all have to be examined to ensure they were safe and effective.

Some tests were not as effective when tested in the field, he said. “We are dispassionate about testing these tests. It will take time to do it properly,” he said.

There has been a reduction in testing with a 30 per cent fall off in GP referrals, the doctor said.

Dr Henry said that to lift restrictions too early could see figures go up again quickly, as had happened in Switzerland.

In the meantime all hospital services remain safe and open and he urged anyone experiencing cancer symptoms to go immediately to hospital.

“Our services are open. Patients will be kept safe there,” he told the programme.

Covid-19 infection rate in hospitals ‘out of control’