Infant and prenatal exposure to pesticides linked to autism risk 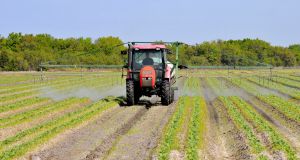 The link to autism was found where pesticides, such as weedkiller, had been used within 2km of the mother’s home during her pregnancy, and the child’s first year

The risk of a child developing autism may increase if they are exposed to pesticides while in the womb, or during the first year of their life, a new study has suggested.

The study examined nearly 3,000 individuals diagnosed with autism in California, against a control sample of 35,370 in the same region who did not have the disorder.

The study, published on Thursday in the British Medical Journal, found prenatal and early exposure to pesticides was “associated with a small to moderately increased risk of autism spectrum disorder”.

The link was found where pesticides, such as weedkiller, had been used within 2km of the mother’s home during her pregnancy, and the child’s first year. Researchers were able to study where pesticides had been sprayed in the Central Valley area, due to requirements to report pesticide use under California law.

The effects of 11 different pesticides examined in the study included glyphosate, a controversial weedkiller common in Ireland, which has been under scrutiny over potential links to cancer.

Autism spectrum disorder (ASD) is a condition that begins in early childhood, and is associated with impaired communications skills, and difficulties with social interaction.

The study looked at people born between 1998 and 2010 in the heavily agricultural region, and 80 per cent of cases were male.

The researchers from the University of California, said the work was an “observational study”, as it was based on reviews of patient records, and geographical data on pesticide use.

Research into links between pesticides and risk of autism spectrum disorder is rare, and the California study represents one of the largest enquiries to date, the researchers said. However, previous experimental studies have pointed to negative impacts common pesticides can have on brain development.

After adjusting for potentially influential factors, the researchers found modest increases in ASD risk among offspring exposed to several pesticides, including glyphosate, chlorpyrifos, diazinon, malathion, permethrin, bifenthrin and methyl-bromide, before birth and during the first year of life, compared with controls.

The initial findings pointed to a need for further research on the underlying factors in the development of autism in children, the US academics said.

On Wednesday, a federal jury in California said popular weedkiller Roundup was a substantial factor behind the cause of a man’s cancer.

The weedkiller is a glyphosate-based herbicide, and late last year another man was initially awarded $289 million in damages in a similar case against Monsanto, the agricultural giant who produces Roundup.