‘We ought to teach children logic’: Ireland’s Nobel scientist 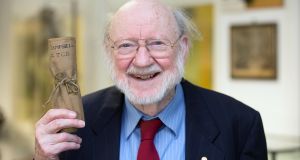 Prof William Campbell at Trinity College Dublin this week, pictured with his original dissection kit from his time as an undergraduate student at the university. Photograph: Paul Sharp/Sharppix

Turning children on to science early is William C Campbell’s formula for a wondrous life. Arming them with an understanding of logic also comes in useful, Ireland’s only living Nobel scientist believes, especially for dealing with the phoney science that is so prevalent today.

Campbell rarely misses an opportunity to extol the virtues of learning in equipping the individual for whatever course life takes. In his case, it led to him winning the Nobel Prize for Medicine aged 85.

Asked about the impact of that honour on his life, his distinctive brand of wry humour and self-deprecation comes to the fore. “It absolutely ruined retirement!” he declares but quickly adds: “Of course, it’s wonderful.”

As for celebrity status? “That’s something I have never got used to.” Fun is definitely in the mix but it’s also “very trying and tiring the older you get”. A total of 13 engagements in Ireland over 11 days during his latest visit would test the stamina of a much younger man – never mind one of 87 years.

He was already retired when he was awarded the Nobel prize, without administrative back-up and no longer living on campus, though he is an associate professor of Drew University in Madison, New Jersey. He lives in Massachusetts.

Nobel winners are wheeled out to pronounce on scientific matters in much the way Albert Einstein was, but in his case he draws a parallel with Sir Alexander Fleming, the man who discovered penicillin: “He was lionised and feted all around the world, and some people thought that since he shared the Nobel prize with two others he was wallowing and gloating, and taking too much for himself.”

Campbell says he feels the team with whom he worked always has to be mentioned, “otherwise, I feel fraudulent”. He won the Nobel Prize with Japanese scientist Satoshi Omura for work in defeating the roundworm which causes tropical diseases including river blindness affecting millions of people in developing countries, notably in Sub-Saharan Africa. More than 50 per cent of adults in African village communities were being infected, which triggered migration away from fertile areas because of their link with waterways.

In 1987, nine years after Campbell first floated the idea, his employer, Merck Research Laboratories, announced it would distribute the drug Ivermectin without charge wherever it was needed. The gesture has helped to combat “forgotten diseases of forgotten peoples”. The World Health Organisation, numerous NGOs and the Carter Center – set up by former US president Jimmy Carter – made it all possible, he adds.

What was critical to the discovery was random screening, basic trial-and-error research, he says. The approach is not favoured in some academic and industrial circles today where the emphasis is on advances in technology and targeted drugs.

“History is so clear, you have to embrace chance. It plays a big role in science. Instead of trying to be above chance use it, welcome it,” he says.

Fleming’s discovery was a result of chance. He took advantage of a chance observation. Campbell believes he heeded the famous Louis Pasteur dictum that in experimentation, “chance favours the prepared mind”.

Twice this week at events in his alma mater Trinity College Dublin he simply choked up with emotion when talking of his mentor Prof Desmond Smyth. “I suppose that’s part of being there. It all comes rushing back.”

He worked under the renowned parasitologist who fostered his interest in parasitic worms. He arrived in Trinity “from the sticks” – Ramelton, Co Donegal – diffident and unsure of himself. But Smyth sensed Campbell’s interest in his work. They stayed in close contact throughout their working lives.

Campbell believes there’s a tremendous need to get young people engaged in science. They should be reminded “science doesn’t have to be their whole life”. It provides a good grounding and comes with the satisfaction of learning, an “inward, warm feeling” of discovery. The extent of “anti-science” evident today is a concern. “In our early education we ought to teach logic. I just don’t understand why that is not a requirement around the world.”

At Trinity, students once had to do a much-dreaded, compulsory exam which included logic – he still has his battered 1927 edition of Abbott’s The Elements of Logic. “It taught the distinction between truth and logic,” he adds – a form of thought that is helpful in countering the current brand of phoney science. On the role of one US president Donald Trump in that regard, he says: “There’s enough said.”

Climate change worries him because there is so much at stake. “On both sides, there tends to be missionary zeal and pontification that gets away from the logic.” The overwhelming body of scientific information accepts climate change and the role humans play, he adds.

He has a remarkable connection with a previous TCD Nobel laureate, Ernest Walton, as he was a regular in his classroom in 1951 when he won the Nobel Prize for physics. “He singularly failed at teaching me physics; brilliant though he was – I’m not saying that was his fault.” He was a familiar sight around campus arriving daily on his bicycle.

He has never been to Ireland without being in Ramelton. It figures in the first slide of his lecture this week at the Royal Irish Academy where he was admitted as an honorary member. It was “an excuse to show off his home town; the place I first became aware of the existence of parasitic worms”, and medicines to get rid of them in animals.

His early education – up to the age of 13 – was in the converted attic of their house with custom-made blackboard. His father, a local shopkeeper and vendor of farm supplies, employed a professional teacher, Elizabeth Martin, to live in their house and teach the children. There was never a mention of science but she infused in them a liking for words; writing and knowing things. None of his family live in the house now, but he visited it last year and went up to the attic. It was a very moving pilgrimage to a special place of learning.

Joy nowadays comes in writing poetry, which explains why he was so pleased to meet President Michael D Higgins on Thursday when he received a Presidential Distinguished Service Award for the Irish Abroad. He likes painting and ping pong (doubles) too.

Asked if he believes in a supreme being determining the fate of humanity, he says he doesn’t have an easy answer but he has never lost the faith his father ingrained in him. “That doesn’t mean I accept it all in the same way.”

He doesn’t want to say more, his views on the subject are clear from his writings, in much the same way his approach to scientific endeavour is obvious from his career. He likes to think he is a compassionate man but what has driven him through life was simply curiosity.

William C Campbell in his own words

On advice for young people starting a career in science: “The opportunities are endless. But I would caution them – don’t forget about other aspects of life. Don’t become too buried in your work – live a life with some roundness.”

On the search for new drugs: “We may not know how to discover new drugs predictably.”