‘We all swallow faeces all the time’: the threat of superbugs

Washing your hands with soap and water is one of the best ways to avoid getting sick and spreading infections to others. Video: WHO 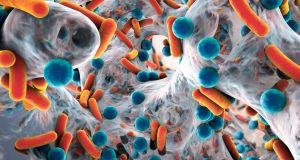 No hospital in the world has devised a way of successfully combating the spread of the superbug CPE, the cause of the recent announcement convening the National Public Health Emergency Team, one of the country’s leading experts in the field has said.

CPE, or carbapenemase-producing enterobacteriaceae, commonly referred to as the CPE superbug, is deeply resistant to antibiotics and lives in the human gut. It is largely harmless – as long as it stays in the gut.

Problems can arise if it gets out, either into the rest of the body of the person carrying it, or, via their faeces, on to a surface touched by someone else and then ingested by them.

“We do all swallow faeces all the time,” says Prof Cormican. “Unless you wash your hands very carefully after using the toilet, you will not get rid of all the faeces.”

It’s a matter of scale: a million CPE superbugs can live on the head of a pin and so it is not hard to imagine several million living in a microscopic speck of faeces that eludes post-toilet hand-washing.

If the bug enters the bloodstream infecting other parts of the body, it can kill – which it does, typically in up to half of cases.

Between 2009 and 2015, 60 patients at the Central Manchester University Hospital died from CPE. An investigation concluded that poorly designed sinks, which allowed contaminated water to splash back out of drains, played a major role in spreading the bug.

Similar fittings were common in hospitals throughout the UK, but in London 10 patients were thought to have caught CPE because a previous occupant of their hospital bed had the bug.

A World Health Organisation video shows how hand-washing should be done. But to suggest CPE is spreading mainly because of inadequate handwashing is oversimplifying matters.

CPE-linked deaths are more likely to occur for a combination of reasons, including changes in medical practices, together with increased human longevity and therefore frailty.

Simply put, most patients in hospitals today are markedly more ill than, say, 30 years ago, when people routinely remained on wards convalescing after procedures. Now recovering patients are more likely to be sent home sooner.

That means that hospitals today care for a greater proportion of people who remain seriously ill – and are therefore more vulnerable – and they are also likely to be older, and therefore doubly vulnerable.

The presence of CPE is notifiable if found in a person’s blood, but is likely to remain undetected if residing in their gut. It is believed that 500-1,000 people in Ireland have the bug in the gut.

Asked whether, therefore, people admitted to hospital should be routinely screened for the presence of CPE in their guts, Prof Cormican said targeted screening had merits.

“If a person is in good health, the chances of their having CPE are vanishingly low,” he said.

However, in relation to high-risk people, whom he defined as those already in poor health and who had high dependency on healthcare services, including nursing home care, he said “these people need to be screened” and offered all appropriate care.

That should include, where possible, single occupancy rooms with en suite toilet facilities, and, if this is not possible, wards shared with patients with the same condition.

He praised the action of the HSE and Minister for Health Simon Harris – “I’m really grateful that the Minister is making that statement and also the impressive leadership from the HSE” – adding that the spread of CPE was not because people were careless but because “prevention is really, really hard”.

“This is not a problem that is ever going to go away completely,” he said. “[But] if we act now, we may be able to keep CPE in its box.”