Doctors may be sharing sensitive patient data on messaging apps

97% of interns at Limerick hospital sending confidential information without consent 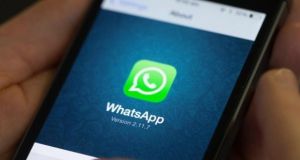 A new study has found 90% of physicians felt they could not provide the best possible clinical care without using instant messaging. Photograph: Brent Lewin/Bloomberg

Doctors in Irish hospitals are “routinely” exchanging sensitive patient data using phone apps such as WhatsApp, potentially putting them in breach of the law and creating security concerns, a study suggests.

A paper entitled “WhatsApp Doc?” published in the medical journal BMJ Innovations found 97 per cent of interns at University Hospital Limerick (UHL) sent confidential information on instant messenger apps without acquiring the consent of their patients.

This was despite the fact that more than two thirds (68 per cent) of them were concerned about sharing the information this way.

“This cognitive dissonance is concerning, and perhaps reflects the pressures of modern medicine forcing doctors to behave in this way despite medico-legal misgivings,” the paper states.

WhatsApp, which is owned by social media giant Facebook, allows people to create multiple group “chats” on phones and mobile devices and to share photos and other information.

While the company claims the data is securely encrypted, WhatsApp is under investigation by EU data protection authorities for changes to its privacy policy that would see it share user data, such as phone numbers, across the Facebook group.

According to the study, patient information was technically obtainable from all the phones of the members in a group.

“A lost phone is thus a potential data security breach, even if the individual in question has never sent information themselves.”

The study, led by the department of geriatrics at UHL and the department of renal medicine at the Royal Infirmary of Edinburgh, says instant phone messaging systems were already “informally integrated into modern medicine in Ireland”.

Some 41 out of 51 (80 per cent) of the intern cohort in UHL suggested this was the case, but all respondents had a WhatsApp account and all had an active group chat used for clinical medicine at UHL.

The researchers said that anecdotally, the pattern was repeated across the country in other institutions and was unlikely to be unique to Limerick. Nine out of 10 physicians felt they could not provide the best possible clinical care without using instant messaging.

The authors said a solution and suitable platform for modern communication was needed and that 85 per cent of interns felt they should be provided with a Health Service Executive-approved instant messaging solution.

Several firms have already developed secure messaging applications for medical staff, which could see them move away from the potential risks of consumer-driven commercial apps.