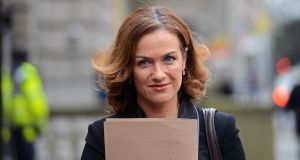 Construction of the new national maternity hospital at the St Vincent’s campus in Dublin 4 is due to begin later this year.

Rhona Mahony, master of the National Maternity Hospital at Holles Street said the first steps towards the construction of the new hospital had been taken.

Approval has also been given to issue tender documents for the pharmacy/car park works associated with the hospital.

Dr Mahony said “construction is expected to start later this year on these works and so after all, the building begins”.

She was speaking at the hospital’s annual Charter Day event last night, her last as master of the hospital.

She said the hospital’s aspiration to move was “put in grave jeopardy” by claims that “the new hospital would be run by the nuns and that certain medical procedures would not be available to patients”.

Dr Mahony was referencing the controversy that unfolded in May 2017 after it emerged the Sisters of Charity would own the new hospital through their ownership of the St Vincent’s Hospital Group (SVHG).

Dr Mahony said under the Mulvey agreement the new national maternity hospital Board will have clinical and operational independence, control of finance budget, the hospital building and appointments of personnel.

Dr Mahony said she was saddened by “unwarranted vitriol” levelled at the Sisters of Charity last year and “the inappropriate conflation of past events”.

“Ireland’s long-standing and terrible treatment of single mothers in Ireland both before and long after the formation of the Free State belonged to all of our society,” she said.

“The building of the new Hospital at St Vincent’s University Hospital represents a wonderful step in rewriting our past narrative and creating an exciting future of opportunity and enhanced healthcare for families in Ireland.”

In a wide-ranging address, Dr Mahony said there were 8,619 babies delivered in 2017, an average of 700 babies per month and 23 babies every day. The hospital’s busiest day last year as July 26th, when 42 babies were delivered. February 11th was the quietest with just nine births.

Dr Mahony said perinatal mortality currently stands at 3 to 4/1,000 and maternal mortality is at 3.0/100,000 maternities which are “truly excellent outcomes for a tertiary institution”.

However, she said she continues to lobby for on-site consultant presence as opposed to the current 24/7 on-call system in existence.

“The cumbersome and tardy process of appointing medical consultants in Ireland is unhelpful when one considers the deficit of consultant posts in Ireland and the very worrying trends in relation to recruitment and retention of doctors, the reliance on locum posts and international medical graduates. A particular national problem in obstetrics and gynaecology,” Dr Mahony added.

Dr Mahony said she is “deeply concerned” by attrition rates in obstetrics and gynaecology and that “a number of brilliant young doctors” have said they left the speciality because “they are fearful to practice”.

Dr Mahony said the State Claims Agency reported the liability for clinical claims was €1.6 billion by the end of 2016, representing a 23 per cent rise in the previous year with 65 per cent accounted for by maternity care despite improving outcomes.