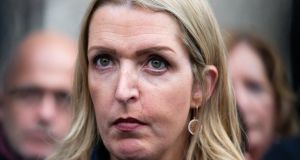 Vicky Phelan: ‘I do not have confidence in the RCOG review process,’ she posted on Twitter. Photograph: Tom Honan

Ms Walsh announced her resignation from the committee after a review by the London-based Royal College of Obstetricians and Gynaecologists (RCOG) of tests carried out by the screening programme was published on Tuesday.

Speaking on RTÉ’s Prime Time on Tuesday night, Ms Walsh said she “absolutely” does not have confidence in the process and revealed that two of the three cases dealt with by RCOG in which mislabelling occurred involved her own slides and those of Ms Phelan.

While still expressing confidence in the screening process, she called on the Government to fund “individualised, independent assessments” for affected women “so they can get the truth”. Ms Walsh was tested under CervicalCheck but abnormalities were missed, forcing her to have invasive treatment, as a result of which she is unable to have children.

“Out of 1,051 slides [reviewed by RCOG], for two of them to be mine and Vicky Phelan’s, it just erodes confidence further in the entire system,” Ms Walsh said on Tuesday night.

Ms Phelan said on Twitter on Wednesday night that she shares Ms Walsh’s views regarding the review process. “I do not have confidence in the RCOG review process,” she said.

A LONG Thread...
I have decided to reactivate my Twitter account for a very brief period in order to express my views on the RCOG Review process. I fully support Lorraine Walsh’s decision to step down from the Cervical Check steering committee 1/9

“It is notable that the focus yesterday by Government was on RCOG’s endorsement of the screening programme rather than on the impact of the findings for those women and families, which was actually the purpose of the review,” she tweeted.

Ms Phelan described Ms Walsh’s decision to step down as “based on an unwavering commitment to the women and families of the 221 Plus CervicalCheck Patient Support Group, a group that Lorraine helped found and which she has dedicated the past 12 months of her life helping women and families caught up in this debacle.”

The only way to restore trust in the screening programme and give peace of mind to the women and families affected would be to have individual independent reviews of their smear screening, cytological and clinical history, she said.

“This is an essential step to ensure that lingering concerns about past failures in CervicalCheck do not undermine future confidence in the screening programme, a programme we both want to restore trust in,” Ms Phelan said.

The RCOG review, which was published on Tuesday, revealed that 159 women’s cervical cancers was missed by CervicalCheck.

That represented 15 per cent of the 1,038 women who participated in the review led by the British college.

It also found that 12 women from this group died as an opportunity was missed to prevent their cancer or diagnose it earlier.

In a further 15 per cent of cases, involving 149 women, the review panel disagreed with the original CervicalCheck reading of smear tests but said they did not believe this had an adverse impact on their health outcome. In total, the review found a discordant result in a third of cases they reviewed, affecting 308 out of 1,034 women.

The RCOG said the overall pattern of discordance found by the review is similar to that found in a much larger slide review of cervical cancer cases in England.