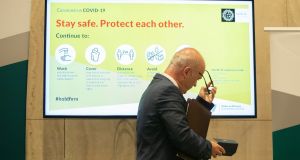 Dr Tony Holohan after he announced that he was stepping down from his role as Chief Medical Officer to care for his wife. Photograph: Collins

In a Q&A zoom call with a group of children in May, Dr Tony Holohan was asked what the most rewarding part of his job was as chief medical officer during the Covid-19 crisis. “The sense that we have helped people,” he replied.

To these kids - and to the rest of the country - the Dublin-born, Limerick-raised doctor had become “Dr Tony”, the unflappable doc who calmed nerves during the coronavirus pandemic.

The chief medical officer was thrust from a largely backroom role in the Department of Health into the living rooms of the nation with his daily televised press briefings.

He was on the frontline of a very public fight to stem the spread of the virus and prevent Covid-19 infections and deaths soaring with his sober announcements followed closely every day.

The infection curve could only have been flattened by radical public action and Dr Holohan became the measured voice of science required to explain with confidence why people would have to adhere to the most severe restrictions ever imposed on their everyday lives.

When his own health was in doubt - when he said he felt “a bit funny” during one of his daily briefings at the end of March - he became the news. Many in the public sighed relief when he returned less than 48 hours later after being checked out in a Dublin hospital.

His announcement at the department’s Covid-19 press briefing on Thursday evening that he is stepping back from his job to spend time with his wife Emer Feely, who has terminal cancer, and their two children brought an outpouring of praise and sympathy for one of the Ireland’s best known medical doctors.

It marks the end to a tumultuous four months of the day-to-day fire-fighting for Dr Holohan in his job, his busiest time in a two-decade career as a public health official.

A graduate of Monaleen national school and Limerick’s CBS Sexton Street - the alma mater of businessman JP McManus - Holohan told those children during that Q&A in May that he came from a “house full of sisters” where he was “kind of the spokesman” - a precursor of his later role.

He played GAA football and hurling as a kid and has remained a passionate sports fan and part-time coach, supporting his football club Templeogue Synge Street GAA and Faughs GAA hurling, also in Templeogue. Away from sport, he stays fit by cycling home along the Grand Canal - an activity he has used to observe and remark on public behaviour during the pandemic.

He graduated from UCD medical school in 1991 and trained in general practice at first, before turning to public health medicine and graduating with a masters in the discipline in 1996.

Dr Holohan was one of the public health officials tasked with reviewing and reorganising the country’s health service in the early 2000s that led to the creation of the HSE in 2005.

Working closely with then minister for health Mary Harney - and a regular at her side during briefings - he was picked from a competitive field to become “CMO” during her tenure at the department.

He was immediately thrown into a public health crisis, dealing with the fallout from the pig-meat dioxins scandal on his first day in the job in December 2008. The following year, he had to manage the government’s response to the global swine flu outbreak.

In 2018, Dr Holohan found himself at the centre of controversy around the HSE’s failure to disclose incorrect results of old smear tests in the CervicalCheck screening programme to affected women and their families. There were calls on him and other senior health officials to resign from patient advocates.

He was also heavily criticised by politicians Alan Kelly TD, now Labour leader, and David Cullinane, now Sinn Féin’s spokesman on health, over his awareness of issues around the tests dating back to 2016 and his failure to tell health ministers at that time.

Dr Holohan denied any wrongdoing and refused to stand down. Leo Varadkar, who had been minister for health before becoming taoiseach, and his successor as health minister Simon Harris ultimately backed him.

The pandemic has been a crisis of a far different magnitude. Throughout Dr Holohan has responded to criticism of his team’s decisions on restrictions - and the pace of how they are introduced or lifted - with fact-based analysis in the face of great political and public pressure.

For now, he is stepping back as the public face of the State’s response team. He hands over his CMO duties to his deputy as he focuses now on the care of his own family rather than the country.

Dr Ronan Glynn, the deputy chief medical officer at the Department of Health since October 2018, has taken over as acting CMO while Dr Holohan is away from the role.

Dr Glynn sits to Dr Holohan’s left during the regular National Public Health Emergency Team briefings at the Department of Health and usually provides details on the how virus is behaving as well as detailed information on “at risk” groups, clusters and health guidance in specific settings.

In Dr Holohan’s occasional absence, he has chaired the briefing from time to time.

Dr Glynn qualified as a physiotherapist from UCD in 2002, a medical doctor from the University of Aberdeen in 2007 and completed a PhD in oncology at NUI Galway in 2012.

His focus as acting CMO will be on reopening the country during the Covid-19 pandemic while taking measures to avoid a second wave of the virus sweeping across the country.

Chairman of Fáilte Ireland resigns after it emerged he is holidaying in Italy 13:45
Urgent report on Dublin eviction ordered by Deputy Garda Commissioner 12:32
Man arrested in Kilkenny for possession of explosives 11:48
Investigation under way after body found in Dublin house fire 10:45
Cousins went paddle boarding at Furbo as usual location was cut off due to Covid-19 10:27

1 Chairman of Fáilte Ireland resigns after it emerged he is holidaying in Italy
2 Urgent report on Dublin eviction ordered by Deputy Garda Commissioner
3 A million trees, including 400,000 oaks, to be destroyed this week
4 Cousins went paddle boarding at Furbo as usual location was cut off due to Covid-19
5 ‘It was pitch black’ - Rescued teenager describes night afloat with her cousin in Galway Bay
Real news has value SUBSCRIBE