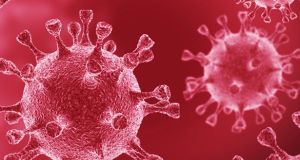 The new coronavirus variant was initially identified among Spanish farm workers, and has spread rapidly through much of Europe since the summer, according to new research published by an international team of scientists on Thursday. Illustration: Paul Scott

Health officials have said it is “too early” to know the significance of a new coronavirus variant identified by researchers, which accounts for the majority of new Covid-19 cases in Ireland.

The new variant was initially identified among Spanish farm workers, and has spread rapidly through much of Europe since the summer, according to new research published by an international team of scientists on Thursday.

Because each variant has its own genetic signature, it can be traced back to the place it originated. The research said the new variant of the virus now accounted for 60 per cent of new cases in Ireland, and 80 per cent of those in Spain and the UK.

Commenting on the research, Dr Colm Henry, HSE chief clinical officer, said it was “too early” to know if the new variation of Covid-19 spread more easily , or was more deadly.

It was common for new viruses to mutate, and the “great majority of mutations” would have no impact on the nature of the disease, he said.

“Whether or not this particular mutation, which appears to have [started] in Spain and spread onwards has its own individual characteristics that makes it even more transmissible . . . it’s just too early to say,” he said.

The spread of the variant out of Spain in recent months coincided with a period of lower numbers of fatalities, Dr Henry said.

“However, that is largely attributed to the fact the virus was largely among younger age groups, so it is too early to say whether this mutation is any more virulent than previous mutations that existed,” he said.

A spokeswoman for the National Virus Reference Laboratory in UCD said the research had “no known implications” for current work to identify a vaccine. The emergence of the new variant, called 20A.EU1, was not expected to impact on the methods of treatment for Covid-19 patients, she said.

The study did highlight “the importance of minimising travel to prevent viral transmission,” the spokeswoman said.

Prof Mills said he could not comment on the variant which emerged from Spain as he had not yet seen the data behind the research. “I think the most important thing from my perspective is that it tells us we brought in a lot of this virus from travel,” he said.