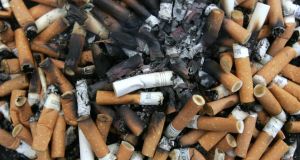 The Government last week approved the first draft of laws to allow for plain packaging.

The world’s largest tobacco company has warned the Government the introduction of plain packaging for cigarettes could lead to “an extremely high price” of compensation being paid to multinational tobacco companies by the taxpayer.

Philip Morris Ltd, the British arm of Philip Morris International, which is responsible for cigarette brands such as Marlboro, commissioned a legal opinion in response to proposals to introduce plain packaging in the Republic. It said such moves would not “withstand legal scrutiny” without providing compensation to the tobacco companies involved.

The opinion and accompanying letter, seen by The Irish Times, were sent to Minister for Finance Michael Noonan and Minister for Health James Reilly. The legal opinion, drafted by Michael M Collins SC, warned that the legal implications of banning tobacco branding were “predictable and stark”.

The Government last week approved the first draft of laws to allow for plain packaging, the Public Health (Standardised Packaging of Tobacco) Bill, which will also allow for larger warnings on standard packets.

“Any proposal to introduce plain packaging or oversize warnings labelling legislation without compensation is likely to be struck down by the European and Irish courts. The alternative is that packaging restrictions come at the extremely high price of monetary compensation,” Mr Collins wrote.