‘There was bonkers stuff. I was told negative energy contributed to my cancer’ 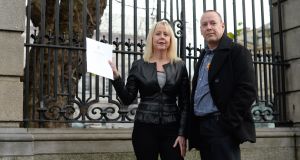 Eileen O’Sullivan and Ramon Whelan outside Leinster House on Wednesday after the launch of new legislation to crack down on advertising of false cancer cures. Photograph: Dara Mac Dónaill

When Eileen O’Sullivan was diagnosed with breast cancer in 2013 she did what would be instinctive for many people and searched online for further information.

Immediately, she was inundated with promoted posts and targeted advertisements.

“I just looked up online, as anyone would, information around my specific diagnosis of triple negative breast cancer. With that, a whole lot of things came up. Some sounded reasonable, but when you dug down through the layers of the onion it really did not stack up.

“There was the totally bonkers stuff, too. This said that the type of cancer that I had was contributed to by having root canals, or not being breast fed, or having too negative an energy.”

Ms O’Sullivan was speaking outside Leinster House on Wednesday where a new Bill to regulate the advertisement of so-called alternative medicines was introduced by Fine Gael TD Kate O’Connell in the Dáil.

The Irish Cancer Society said the Treatment of Cancer Advertisements Bill would save lives by banning any advertisement that suggested that medical treatment was unnecessary for the treatment of cancer.

“The Irish Cancer Society is outraged that people are seeking to profit from vulnerable patients, misleading them into taking treatments that, in fact, may be incredibly harmful and even increase their chances of maybe dying from the disease,” the society’s chief executive Averil Power said.

“The death rate for people who are misled into alternative treatments at the cost of continuing with conventional medicine is up to five times higher. This Bill, if it is passed, will undoubtedly save lives.”

Describing the proposed law as “timely”, Taoiseach Leo Varadkar said. “I share the real concern about the exploitation of many people who are sick with cancer by those offering cures and treatments which do not work along with various other false health claims. They do so for profit and abuse immensely vulnerable people.”

Ms O’Sullivan, who works as a financial consultant, was found to have inherited the BRCA1 gene which is associated with breast cancer.

“What you don’t expect is that feeling of being a passenger in your own treatment journey. You feel quite out of control in terms of what is actually happening to you,” she said.

“Once you key in ‘cancer’ and anything into your keyboard or phone, you suddenly get emails, and on Facebook you get all of these promoted posts. On Twitter, if you follow anyone, even evidence-based experts, it aligns you to be targeted.”

Ms O’Sullivan said many cancer patients can be easily influenced by what they find online because of their vulnerable position.

“When you look at it first, you think nobody could be that bad to sell something that does not work to a cancer patient. Then you see it is an organised, marketed, business plan. It is lucrative business.

“I don’t think anyone will know until you hear those words ‘you have cancer’ how you will react. You just don’t act as you normally would. Your pragmatism and your logic sometimes becomes the logic of what you want to believe rather than the logic of what is true. You always hope there is going to be something easier.”

She had asked her oncologist about the benefits of turmeric as a treatment, for example, something she had seen pop up multiple times online. Her oncologist told her that it could in fact interfere with one of the drugs being used in her treatment.

Ramon Whelan, who works in the Department of Social Protection, was diagnosed with testicular cancer in 2006 and became involved with the Irish Cancer Society four years later, working as a peer support volunteer.

“It is only through them that it has come up,” he said. “We start getting asked the question ‘did you try this’ and ‘did you try that’ and only then I saw what was being bandied about as a cure. Stuff about juicing, and conspiracy theories about Big Pharma.”

There has been an increase in such calls in recent years, he said. “It has been a steady, steady increase.” He said those who advertise “alternatives” to conventional medicine prey on the patient’s “hope and insecurities”.