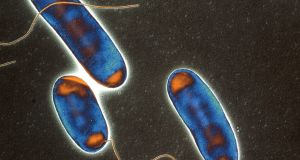 Water tests in September found traces of legionella in one water system in the men’s toilets in the basement of the rates office, a Georgian building opposite City Hall on Dame Street.

Dublin city’s rates office has been closed down and its staff moved following the discovery of the bacteria which causes legionnaires’ disease in its water system.

Annual water tests carried out by Dublin City Council in September found traces of legionella in one water system in the men’s toilets in the basement of the rates office, a Georgian building opposite City Hall on Dame Street.

The bacteria can cause legionnaires’ disease which can be fatal and is particularly serious for older people, those who are immuno-compromised, and for heavy smokers.

The area was closed to staff, but follow-up tests carried out in October identified further traces of legionella in “a number of water outlets” throughout the building, the council said.

On November 1st, the council decided to shut down the building and relocate its staff. Most staff, a total of 30, were moved to the Civic Offices on Wood Quay, with a number of rate collectors working from home.

No staff contracted legionella, the council said. While the public had been able to access the building, there was “no access to the toilets in the building to the general public”, it said. Rates are now paid at the customer service centre in the Civic Offices.

However, Independent councillor Mannix Flynn said the council should have made an immediate public announcement of the finding, due to the seriousness of the disease.

“They should have issued a statement straight away – this is the water system of a public building, where a bacteria was found that causes a very serious disease.”

The council said work was under way to determine the source of the legionella and remedial work would be carried out on the building in due course.

Legionnaires’ disease is a type of pneumonia that usually starts with flu-like symptoms, including fever, tiredness, headache and muscle pains.

These are followed by a dry cough and breathing difficulties, which may progress to a severe pneumonia. The disease is spread through the air from a water source. People become infected when they breathe in tiny droplets of water contaminated with legionella bacteria.

It causes death in about 7.5 per cent of cases, but most cases can be treated successfully with antibiotics.

According to statistics provided by the Health Protection Surveillance Centre, the rate of legionnaires’ disease is much lower in Ireland than the European average, occurring in approximately 3.8 people out of every million in Ireland, compared to 11.2 cases per million of population in Europe.