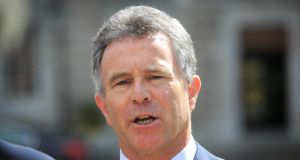 Chairman of the Public Accounts Committee Seán Fleming has said the committee has written to the Health Service Executive, which provides funding to the Saint John of God Group, and invited representatives to attend a hearing in the next couple of weeks. Photograph: Gareth Chaney Collins

Charity St John of God Group has defended once-off payments totalling €2 million it made to senior managers in 2013.

Separately, chairman of the public accounts committee, Deputy Sean Fleming, has said the committee has written to the Health Service Executive, which provides funding to the charity, and invited representatives to attend a hearing in the next couple of weeks.

As a section 38 charity, in receipt of €130 million from the HSE a year, St John of Gods signed a service level agreement which states it “shall not pay nor subsidise salaries, expenses or other prerequisites which exceed those normally paid within the public sector.”

In 2013, it was found to be in breach of those caps and faced a funding cut if it did not comply. It subsequently made the once-off payments to its executives.

A spokesman for the charity told The Irish Times the once-off payments were made in 2013 based on professional advice, to discharge contractual obligations with managers.

“The payments did not impact in any manner or at any time, on the provision of services and supports,” he said.

He said the order believes it is in compliance with public pay policy, but welcomes any review by the HSE into this matter, and will fully co-operate.

“It has already shared with the HSE, the independent professional advice it received in 2013,” the spokesman said.

News of the payments follow reports earlier this week that Console founder Paul Kelly, his wife and son allegedly ran up credit card bills of almost €500,000 on items such as groceries, designer clothes and foreign trips over a three-year period.

Mr Fleming said there had been issues with Rehab, the Central Remedial Clinic and now Console and St John of Gods.

“There is one common thread, the HSE gives these organisations a whole lot of money and there doesn’t seem to be any control or follow up by the HSE as to what actually happens to the money,” he said.

“A lot of the HSE budget goes out to third parties and the public accounts committee will have to be satisfied there is control over that,” he said.

The committee will hold its first meeting next Thursday and, Mr Fleming said, it hopes to sit two or three times before the Dáil breaks for the summer, on July 21st. At least one of those meetings will be with the HSE, he said.

Asked whether St John of Gods would be asked to appear, he referred to an ongoing court case taken by former head of Rehab, Angela Kerins, against the committee.

“There’s an argument our remit extends to the HSE and we don’t have direct control over the organisations that the HSE passes money on to, so our point of control is the HSE, that’s where we start,” he said.

The HSE has said it only became aware of the top-up payments when it was contacted by newspaper, The Mail on Sunday. It was never consulted by St John of Gods about the payments, but said the charity should have fully disclosed them at the time. It also said it will carry out a full review after which, it will be “possible to better understand how to proceed”.

In a statement last night, Sinn Féin deputy leader Mary Lou McDonald said there were questions for the Government and successive Ministers for Health, following the emergence of “yet another charities scandal”.

“They have failed to deliver proper oversight and due diligence even in the face of ongoing scandals in the charitable sector,” she said.