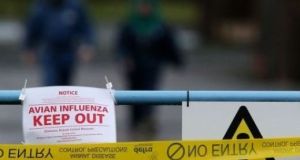 The Department of Agriculture, Environment and Rural Affairs confirmed on Friday that the goose had tested positive for H5N6 Avian Influenza. File photograph: Andrew Milligan/PA Wire

The second case of bird flu this year in Northern Ireland has been confirmed.

The disease was detected in a wild greylag goose found in Lurgan Park, Co Armagh.

The Department of Agriculture, Environment and Rural Affairs confirmed on Friday that the goose had tested positive for H5N6 Avian Influenza.

It had been reported to the department as part of its dead wild bird surveillance programme.

This is the same strain as was confirmed in a wild buzzard in Co Antrim in March.

The Chief Veterinary Officer for Northern Ireland, Dr Robert Huey, said he would strongly encourage all bird keepers to register their flocks.

“This is the second case of H5N6 in a wild bird in Northern Ireland this season and is not unexpected given that avian influenza continues to circulate in wild birds across Europe,” he said.

“It further emphasises the requirement for all bird keepers to remain vigilant and to critically review their biosecurity measures - for example, feeding and watering birds under cover to help reduce the risk of their poultry coming in contact with wild birds.

“It is important that flock keepers report early any suspicions of disease.”

Advice from the Public Health Agency is that the risk to public health from the virus is very low. However, the general public is advised to take appropriate biosecurity precautions before touching or picking up birds that are dead, or appear to be sick or dying.

Members of the public are encouraged to report dead waterfowl (swans, geese or ducks) or gulls, or five or more dead wild birds of other species in the same location, to the department’s helpline on 0300 200 7840, Monday-to-Friday, 9am to 5pm.