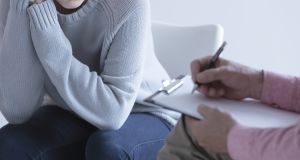 The number of children being cared for in child and adolescent mental health services in Ireland has increased by 40 per cent, Minister for Education Richard Bruton told the Dáil

A child psychiatrist who is resigning from his job in the southeast, has said conditions in the region’s mental health services are unsafe and unfair on the children who use them.

Dr Kieran Moore, a specialist consultant paediatric psychiatrist in Co Wexford, said he had worked in the region for the past 16 years before deciding to quit.

“What the team is being asked to do is absolutely unsafe and unfair for children. It’s not a service in my view, despite my best efforts,” he told The Irish Times.

Dr Moore told an Oireachtas committee on Wednesday that he and two colleagues were resigning from their roles, which committee members said would leave Wexford and Waterford without public consultant psychiatric services for children from mid-July unless the positions are filled.

On Thursday, he said there was supposed to be 30 clinicians working in the greater Wexford region but just 5½ posts were filled at present.

Dr Moore said there were no in-patient beds in Wexford and that when he needs a child to go into hospital, “I’ve to fill out a form which takes an hour and fax it to four different in-patient units”, all of which are a long distance away.

“Then they will decide whether a child can get a bed. In the vast majority of cases children don’t get beds and they never get them urgently,” he said.

“Even if they do get a bed, they’re taken away from their families, their school and they meet a whole new set of clinicians who don’t know them and will never see them again, so we’re doing something wrong.”

The HSE has said it is operating national and international recruitment campaigns for consultant child and adolescent psychiatrists which would be drawn on to fill positions on a permanent basis in Wexford and Waterford.

“Among additional options being looked at are vacancies being filled on an interim or temporary basis, inclusive of the possibility of utilising consultant psychiatrists from neighbouring HSE Community Healthcare Services,” it said.

Concerns about the mental health services were raised in the Dáil on Thursday with Minister for Education Richard Bruton saying the Government had relied too much on a consultant-led service and had neglected primary care services.

He said mental health was “an area of very high growth in need” but there were huge problems in recruitment in Ireland and other countries. The number of children being cared for in child and adolescent mental health services had increased by 40 per cent, he added.

Sinn Féin mental health spokesman Pat Buckley warned that mental health services would come “crashing down” if the Government did nothing. He pointed out that in 2016 “no applications whatsoever were received in respect of 44 consultant psychiatrist posts advertised” across the State.

“We have patients sometimes who are potentially dangerous. A psychiatric facility will have people who are unwell and upset, and there’s no proper panic alarm for staff, the chairs are supposed to be bolted down so they can’t be used as weapons,” he said.

“People forget that we are also dealing with 16- and 17-year-olds and there have been assaults on staff in the past.”

Senator Grace O’Sullivan, who is from Waterford, said that even if the HSE begins a recruitment process immediately, “it is going to take a long time before the necessary staff are in place”.

“Currently there are 500 places unified nationally, with a staggering 26 psychiatric nursing positions vacant in the southeast region. Recruitment can take up to six months, with said nurses having to go through a 25-step process.”