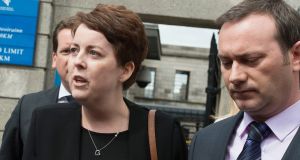 Ruth Morrissey and her husband Paul outside the Four Courts at the conclusion of her case.Photograph: Dave Meehan

The continuation of State screening programmes is seriously threatened by the implications of last week’s High Court judgment in the Ruth Morrissey case, radiologists have warned.

The Faculty of Radiologists have called on “all those concerned” to “do their utmost” to consider the issues raised by the judgment and ensure the public is not denied access to “these potentially life-saving programmes”.

Quest Diagnostics, the US laboratory that was found to have negligently read Ruth Morrissey’s CervicalCheck smear test, is planning to appeal last week’s High Court decision in the case, according to sources.

Last week, terminally ill Ruth Morrissey and her husband Paul, who sued over her CervicalCheck smear tests, were awarded €2.1 million damages by the High Court.

“We are concerned that the standard of ‘absolute confidence’ mentioned in the judgment will be impossible to attain and may have multiple unintended consequences including additional unnecessary tests and procedures on patients who do not have cancer,” said Dr Niall Sheehy, dean of the faculty.

“All screening tests are associated with a small number of false-negative results and the Irish screening programmes, including BreastCheck are no exception,” Dr Sheehy said in a statement.

“Despite operating to the highest possible standards, programmes expect a certain number of such cases each year. There are published international rates for anticipated interval cancers and BreastCheck has consistently performed in line with these international benchmarks.

“We are concerned that if false negative screening tests are regarded as a breach of care, this position may potentially threaten the viability of the screening programmes altogether.”

Attorney General Séamus Woulfe is currently examining the judgment by Mr Justice Kevin Cross with a view to advising whether there are sufficient grounds for appeal. Political sources say Government concerns lie with the wider implications of the case rather than the award to Ms Morrissey and her husband.

The Health Service Executive (HSE) is also considering an appeal, though any action by the State would ultimately be decided by the Government and lodged by the State Claims Agency.

Senior clinicians who attended a meeting with health bosses on Wednesday expressed extreme concern about the implications of the judgment. About 30 senior staff from screening services and other areas that could be affected by the ruling attended the meeting, which was also attended by the HSE’s legal advisers.

A second laboratory, MedLab Pathology, which was also found negligent for failing to reject a smear taken in 2012 for having an inadequate number of cells, has already indicated it may appeal the judgment.

Mr Justice Cross awarded damages of €10,000 against the HSE for its failure to inform Ms Morrissey of the results of audits conducted in 2014, which found her 2009 and 2012 smears had been inaccurately read. The audits were conducted after she had developed cervical cancer.

While the award against the HSE in the case was small, the judge’s finding that it and not the testing labs has primary liability could leave it significantly exposed in scores of other cases being taken by women alleging negligence by CervicalCheck.

There are also concerns within the health service that the ruling will apply not just to smear testing but to all screening services and possibly also to diagnostic tests.

The judgment has caused particular concern at the Coombe hospital, the only Irish lab providing services to CervicalCheck.

“The hospital is continuing to provide cervical cytology services as part of the national screening programme,” a Coombe spokesman said on Wednesday night.

The decision has been described by staff in screening services as the “death knell” for their programme, but Cian O’Carroll, the solicitor representing Ms Morrissey, has said suggestions women could end up getting unnecessary treatments because of indecision over tests were “inappropriate and hysterical”.

Any appeal by the State is likely to focus on the judge’s declaration screeners must have “absolute certainty” that there are not abnormalities on a slide before they give it the all-clear. Clinicians maintain this is not attainable in screening programmes.

Health sources say this threshold could undermine the cost-effectiveness of screening services, as more time would have to be spent testing samples and more patients would have to be retested.

Parties have 10 days in which to lodge an appeal, which could be made to the Court of Appeal or the Supreme Court.

The HSE is expected to prepare a memo in the coming days for the Department of Health explaining the concerns of health staff over the decision.

A HSE spokesman said the Morrissey judgment was still under examination within the organisation. The State Claims Agency declined to comment.

Mr Justice Cross sourced the “absolute confidence” threshold in his ruling from a 1999 judgment of the English Court of Appeal.