Life with epilepsy: ‘I took a seizure and fell against the TV and cut my throat’ 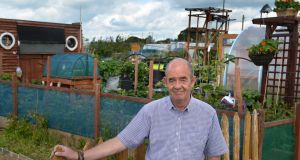 From his mid-20s to late-30s, Geraghty, from Malahide, Co Dublin, was liable to have a seizures anywhere and at any time. They happened while he was standing, sitting on the toilet, going for a walk, or even on the side of a rugby pitch as he was coaching.

The unpredictability of never knowing when a seizure might happen affected his confidence, his work and social life, and made managing his life difficult.

It culminated in a frightening event which fortuantely happened while he was at home with his wife.

“I took a seizure while I was at home and fell against the television and cut my throat,” he recalls.

“I had to have nine stitches in my throat. I’m married to a nurse, and before she called an ambulance she wrapped me up in blankets. I had three more seizures in A&E and was in Beaumont for nine days.”

While in Beaumont Hospital, Geraghty came under the care of consultant neurologist Prof Norman Delanty. He was prescribed medication, which gave him 14 years of being seizure-free, until he experienced what he calls a “blip” last year.

The “blip” happened out of the blue while he was sitting in the office with two colleagues. It was not a particularly violent seizure, but Geraghty was reminded that he was still susceptible to seizures.

“Fourteen years seizure-free doesn’t mean you won’t have it again,” he says. “My wife still worries about me in the car. I do too, and if I’m not 100 per cent in the morning, I’ll walk to work, or she will drive me. It’s very much still at the back of my mind.”

Geragthy runs a community allotment project with 300 plots in Malahide, 75 of which are reserved for people with epilepsy. He meets people of all ages who have unpredictable seizures and sees the effect it has on them.

There is the crane driver who lost his job, the seven-year-old girl who had two surgical procedures but remains unstable, and several teenagers who have seen their social and academic lives wrecked due to a serious loss of confidence.

Geragthy believes that a device which could predict when a seizure was about to happen would dramatically improve his life and that of many others.

“If you could do a test that said you’d have no seizure over the next 24 hours that would change my life completely. If they can predict in a reasonable time, we’d be able to prepare. It’d make life manageable.”