Road outrage: cyclists call for a better deal in Dublin 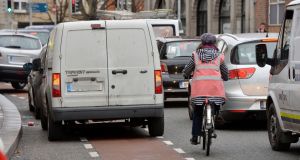 Earlier this year, the Government allocated more than € 23 million for sustainable transport projects in the greater Dublin area, with several cycling projects earmarked for funding including the extension of the Royal Canal off-road cycle route, the expansion of the Dublin bike scheme and the continuation of the cycling route around Dublin Bay.

Dublin City Council also has impressive plans for cycling infrastructure in its 2016-2018 capital programme, with more than € 6 million expected to be spent during the period on developing a segregated cycle path up the Liffey, and almost € 4 million for a route from Fairview to Amiens Street among key projects.

These are significant sums for projects likely to be welcomed by anyone who spends time in the saddle. However, most of these off-road projects are largely to the benefit of leisure cyclists, and while flagship cycleways are getting the cash, the condition of on-road cycling infrastructure, used daily by commuters, and anyone else who uses their bicycle as transport is deteriorating appallingly.

Last year, the number of people cycling into Dublin city centre during the peak morning period of 7am-10am exceeded 10,000 for the first time since the city council began keeping records in the mid-1990s.

The commuter cyclist is doing the heavy lifting in increasing cycling numbers and is the unsung hero of sustainable transport, but isn’t getting the facilities, or the respect they deserve.

“We welcome the Royal and the Grand canal cycleways, and some commuters do use them, but at the moment the majority of cycle routes into the city are mixed use or part of cycle lanes and the surfaces are poor in a lot of places,” says Damien O Tuama. national cycling co-ordinator with cyclist.ie and spokesman for the Dublin Cycling Campaign.

The recovery in the economy has not filtered down to the city’s road surfaces and if anything is making them worse,he says.

“Cyclists can be destabilised quite easily, and there is a problem, particularly with construction picking up, of poorly reinstated roads following utility works, and roads being damaged by construction vehicles and machinery and not being reinstated at all.”

In addition to poorly maintained surfaces, poorly thought-out infrastructure can pose a danger to cyclists. The problems of cycle lanes which end abruptly without warning, or tip a cyclist suddenly from an off-road pavement path into traffic, have been well-documented. But even with more recent infrastructure, inconsistent design is causing problems.

“Take the cycling boxes at junctions. In a lot of cases you have drivers cruising into them, and in some places it’s because they aren’t clearly marked, or have bicycle logos that are too small.

“Also, at a cross roads they need to be installed at every arm of the junction to be effective.”

Mr O’Farrell and other cyclists regularly post photos of lanes blocked by parked cars on Twitter using the hashtag above.

“We need to Garda Síochána Traffic Corps to enforce this, but they don’t seem to see it as a priority. It’s not just a convenience issue, it’s a real safety problem. No one is going to take their child cycling on the road if they know they are going to be forced out into traffic, if there’s a cycle lane there they should be entitled to use it.”

The solution, in place of enforcement and motorists obeying the law, is to physically segregate cyclists from general traffic – without putting them on pavements and into conflict with pedestrians.

The use of bollards, such as on the south-bound carriageway of O’Connell Street between the junction of Abbey Street Lower and O’Connell Bridge, or kerbing as used on parts of the Grand Canal, have been successful, but involve sacrifice.

“To do it properly, you have to take away space from general traffic, or take out a line of car parking; about 200 spaces had to be taken out for the Grand Canal route.”

After several years of the position being vacant, the city council has recently appointed a new cycling officer, Sarah Scannell, and cycling campaigners hope she will bring a coherency and a general upgrade of cycling infrastructure.

Ms Scannell was not available for interview at the time of writing.