Review of pathologist’s work who misdiagnosed cancer ‘not warranted’ 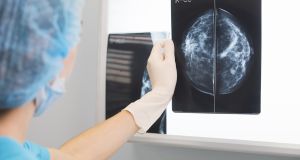 St James’s Hospital said there was an “inherent and unavoidable error rate” in diagnostic specialities where the there is an interpretation of images. File photograph: Getty Images

St James’s Hospital has said a full review of the work of a pathologist who misdiagnosed an aggressive form of breast cancer is “not warranted”.

The hospital said while the doctor in question had made a mistake, the “error could equally have been made by any other competent pathologist and does not represent incompetency”.

The position was outlined in a statement ahead of an RTÉ Prime Time programme on Tuesday, investigating the care of patient Alison McCormack who later settled her case against the hospital.

In 2010, having discovered a lump in her right breast she was diagnosed with DCIS (Ductal carcinoma in situ) a localised form of breast cancer which, she was told, could be completely dealt with through surgery.

The procedure was carried out but two years later Ms McCormack discovered a lump in her neck. She returned to St James’s where she was diagnosed as a return of the previous cancer which had spread to her lymph nodes. This was subsequently treated but she was left with health issues including lymphedema that causes severe swelling of her arm.

However, it emerged at a 2013 meeting with hospital officials that she had been misdiagnosed. The original breast cancer was in fact an invasive form of the disease.

In a consequent sample review of 300 other breast cases the pathologist had dealt with in the same year, the hospital opted to look at every 10th case, as well as all nine DCIS cases that matched her own specific diagnosis. One further misdiagnosis was discovered, also DCIS.

Prof Ian Ellis, consultant pathologist at Nottingham City Hospital who looked at Ms McCormack’s case as part of her legal action, told RTÉ the review did not go far enough.

“It sounds very small, two out of 39, but these are very, very fundamental and serious errors so they are red flag type of errors,” he said.

“And so in my opinion that is of concern. The number of breast cases that he had looked at were a few hundred – that’s not a huge number of cases and certainly if I was asked my opinion on what to do I would recommend a review of all the cases.”

In a statement, St James’s Hospital fully acknowledged the error in Ms McCormack’s case, but ruled out any further reviews.

“While a cancer diagnosis was made the extent of the disease was not identified and this undoubtedly has had very profound implications for the patient concerned. For this the hospital was and remains unequivocally sorry,” it said.

But, it added, there was an “inherent and unavoidable error rate” in diagnostic specialities where the there is an interpretation of images. No evidence of further missed diagnoses had arisen since, it added.

“It is the view of St James’s Hospital that any further review of the remainder of the pathologist’s work is not warranted.”