Residents in five counties over 30 minutes from emergency department 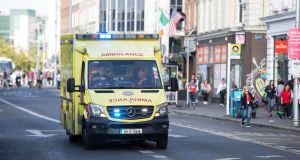 Dubliners are an average distance of just 5km from and ED, equivalent to about 10 minutes on the road. Photograph: Tom Honan

Residents of five Irish counties are more than half an hour’s drive from the nearest hospital emergency department, new research shows.

Counties Carlow, Leitrim and Donegal are the worst-served Irish counties for access to emergency department, the analysis based on Eircode data reveals.

On average, Carlow residents are 40km from the nearest ED, equivalent to a 37-minute drive during off-peak times. No one in the county lives nearer than 20km from a facility.

Leitrim fares only slightly better with the county’s inhabitants, on average, 39km from emergency health services.

Donegal was the third-worst county with an average distance of 36km, followed by Longford and Mayo at 32km and 31km respectively.

In contrast, Dubliners are an average distance of just 5km from an ED, equivalent to about 10 minutes on the road. Two out of three residents live 5km away, and only 4 per cent are more than 20km, from a facility.

Louth, Kilkenny, Meath and Limerick are also relatively well served by dint of being near to a hospital offering emergency care.

The time it take a person needing urgent medical care to an ED is a major determinant of outcomes, for instance in the case of heart attacks or stroke.

The analysis was carried out by Gamma, a “location intelligence solutions provider” that processed Eircode data using intelligent software and routing algorithms. A more sophisticated picture can be built up by applying data relating to age groups, car access and public transport.

The company says this type of analysis can be used to make better-informed decisions about locating health, housing, retail, leisure amenity and other services.