Record numbers travelling to other EU states for medical procedures 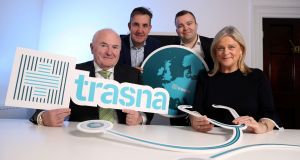 A photograph from the launch of Trasna, a new Irish healthcare company, in October. Photograph: Jason Clarke

Some 2,234 Irish patients availed of the EU cross-border healthcare directive in the first eight months of this year, more than in the whole of 2017, according to the HSE.

The number using the scheme, which allows patients to access medical treatment in other EU member states, has soared from just seven in 2014 and 150 in 2015.

A further rise in the flow of patients to the UK and Poland, principally, can be expected following the launch of new private services offering to facilitate them in their use of the directive.

The new services promise to help patients with obtaining funding and referrals and, in some cases, will provide assistance with travel and accommodation costs.

Charter Medical Group launched its cross-border directive elective surgery service on Tuesday, saying it has signed an agreement with a British hospital group to treat Irish patients under the directive.

Another service-provider is Ramsay Health Care, which operates 235 hospitals globally, including 34 in the UK and 120 in France. In Britain, it treats 360,000 patients a year for the NHS.

Another company, Trasna, began providing a cross-border service last month. Set up by former directors of health insurer Bupa Ireland, it employs 10 people at headquarters in Dublin and a call centre in Waterford.

Asked about entry of private operators into the market, the HSE said it “avails of opportunities to inform any audience of the provisions of the directive”.

So far this year, it has spent €7.5 million reimbursing patients under the directive.

The most common surgeries people travel to other EU states for are cataract operations, hip and knee replacements, and gynaecological procedures.

Charter, which operates an urgent care clinic at Smithfield in Dublin, says its new service will include a free medical assessment in Dublin prior to travel and free post-operative care. The cost of air fares and accommodation, up to €200, will also be covered.

“It addresses the challenges family doctors face in referring patients to facilities and specialists abroad who they are unfamiliar with.”

The company says it will help patients source bridging finance for the procedures from credit unions and will also help with the reimbursement of surgery costs from the HSE after the work is done.

The cost of a basic treatment such as a cataract operation is expected to be about €2,000, while for more complex orthopaedic procedures funds of up to €15,000 may be required.

The cost of the procedure to the patient will be no more than what the HSE will reimburse, it says. Asked how it would make money on the service, Charter said it planned to bulk buy access to procedures at Ramsay hospitals.

Trasna, which is partnered with two large healthcare companies overseas, plans to focus initially on the southwest, which has some of the longest waiting lists.